Fallout 76 is a multiplayer online game released on November 14, 2018. Before the game's release, several sessions of the B.E.T.A., starting October 27 exclusively for Xbox One, were played by people who pre-ordered the game.

The game is set in West Virginia, based around Vault 76, one of the 17 control vaults. It features a map four times the size of Fallout 4, spanning six distinct regions (The Forest, Toxic Valley, Ash Heap, Savage Divide, The Mire, and Cranberry Bog).

Set just 25 years after the Great War, in 2102, the player is one of Vault 76's dwellers, tasked with rebuilding the nation. Emerging from the safety of the Vault on Reclamation Day, it's up to the player to face the wastelands, overcome its challenges and rebuild America in whatever image they desire.

Nuclear weapons are featured in the main quest, as a tool to defeat the Scorchbeasts, massive bat-like mutants that emerged in West Virginia and threaten your rebuilding efforts. Only nuclear weapons leftover from the Great War can seal their fissures and protect the wasteland.

The game retains much of Fallout 4's basic gameplay, with one major difference: The entire game is online, allowing for multiplayer gaming with up to three other players in your party and an upper limit of 24 to 30 players per server. The game saves character progression automatically and retains it across all servers, allowing for a seamless experience. As with other Bethesda games, 76 can also be played solo, without the interference or aid of other players. The new CAMP system allows for setting up settlements in any area of the map, without being tied to workshops.

Furthermore, players can launch nuclear missile silos that survived the Great War. By collecting nuclear launch codes from ghoul officers or scavenging them across the map, players can also launch missiles against enemy camps or regions, destroying them and making large amounts of irradiated material available for pilfering. The target zone is very high level and requires power armor and special gear to tackle.

Radiation is a major gameplay element in the game: Instead of radiation limiting your maximum health or reducing SPECIAL stats, like in previous games, here it increases the chance of you developing mutations over time, which act like traits, giving you a positive and negative modifier. Mutations can be cured or made permanent.

The physical Standard Edition of Fallout 76 includes the game disc.

The digital variant of the Standard Edition of Fallout 76 includes a license to download the game.

The physical Tricentennial Edition of Fallout 76 features: Tricentennial power armor customization skins for the T-51, T-45, T-60, and X-01 power armor suits, and matching skins for the 10MM pistol, hatchet, and laser rifle. Other bonuses include a Vault Boy Mascot head, an Uncle Sam outfit, an emote, workshop posters, and a photo frame, all of which are included on a redeemable code included with the game disc.

The digital variant of the Tricentennial Edition of Fallout 76 features the same bonuses as the physical variant, all included on a redeemable code included with the license for the game. 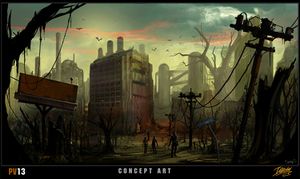 Before the announcement of Fallout 76, several previous attempts at making a Fallout online game have been made, codenamed Fallout Online.

According to Feargus Urquhart, when Brian Fargo was still the president of Interplay (which developed and published Fallout and Fallout 2), Fargo proposed a possible Fallout MMO to be made by Black Isle Studios, but Urquhart refused. After Urquhart's refusal the game is believed to have been developed by Engage Games Online, an online entertainment company formed by Interplay in 1996. This development went nowhere due to Interplay's financial difficulties.[1] At one point, Fallout Tactics developer Micro Forté was also contracted to develop Fallout Online but the project was eventually canceled.

The last such attempt was Project V13 by Interplay. In April 2007, Bethesda purchased full rights to the Fallout IP for $5.75 million USD. While Bethesda now owned the rights to the Fallout MMO IP as well, clauses in the purchase agreement state allowed Interplay to license the rights to the development of the MMO.[2] Specific requirements were stated in the agreement that if not met, Interplay would immediately lose and surrender its license rights for Fallout. The game was being developed by Interplay in cooperation with Masthead Studios, and officially announced as Fallout Online in 2010.[3]

In, 2009 Bethesda moved to rescind the Fallout MMORPG license, claiming that Interplay is in breach of the agreement for failure to commence full scale development by April 4, 2009 and to secure certain funding for the game. Interplay disputed these claims.[4] On January 9, 2012, it was announced that the litigation ended with a settlement, in which Bethesda acquired full rights to the Fallout MMO for $2 million.[5]

76 is rooted in ideas for a multiplayer mode for Fallout 4. Although speculative concepts were developed as early as 2013, they were shelved due to a lack of manpower. Everything changed with the foundation of Battlecry Studios in Austin, Texas, by Zenimax and the later cancellation of their flagship title. BGS offered Battlercy Studios the challenge of retrofitting Fallout 4 code with netcode, to enable multiplayer functionality. The challenges were multiple, many stemming from the base architecture of the game. For instance: NetImmerse, Gamebryo, and Creation all work by loading cells around the player character - decoupling cell loads to allow for multiple players to exist in one instance was tricky.

Another challenge was creating a world that was large enough to support multiple players and did not retread the same paths as before - in particular, focusing the game around another large city. West Virginia was picked because it was an East Coast location, thus familiar enough, and remote enough to avoid destruction by nuclear weapons. Various landmarks were picked for inclusion, including Harper's Ferry, which was nudged down into the game area despite laying deeper towards Maryland. More importantly, the lore of West Virginia was a natural source of inspiration for many of the monsters to include, like the Grafton Monster, Flatwood Monster, snallygaster, and the Moth Man. Setting the game close to the Great War also allowed the team more liberty with making wild mutations and including it in the game, with the explanation for their disappearance being that they simply died out.

The decision to remove regular humans was made early on, to allow for each survivor encounter to be special. The role of raiders was taken over by The Scorched, semi-feral ghouls who still remember how to use weapons and armor.