From The Vault - Fallout Wiki
(Redirected from Fallout GURPS)
Jump to: navigation, search

History of losing the license

On June 11, 1996, Bob Apthorpe reported that SJG received more screenshots of GURPS Fallout, noting that the game will be as true to the real GURPS "as a computer version can be. Interplay is paying close attention to the rules and plans on fully supporting the reaction rules (in case anyone takes a Charismatic, Very Beautiful character with Voice and Sex Appeal."[1]

On January 13, 1997, Steve Jackson reported on the SJG website that Fallout is rolling along, scheduled for an April release and mentioning that SJ Games received an alpha version for in-house evaluation. He was not aware that a month later, Interplay would release a statement that the license would fall through.[2]

To this day, the precise reasons behind Interplay and Steve Jackson parting ways remain unclear. Scott Campbell claimed in The Origins of Fallout that Steve Jackson Games did not approve the violent intro in Fallout and that the game would likely have to be remade in order to retain the license.[3] However, Sean Punch, GURPS Line Editor at Steve Jackson Games, remarked in an interview with RPG Codex that he is "skeptical of claims that a single cut scene, loading screen, dialog line, etc. caused the parting of ways".​ He has also stated that the issue that was cited as a reason for the abandoning of the license was "that the license didn't word the approval process in a way that was good for either party" and that it was ultimately easier to remake the RPG elements than rewrite the licensing agreement with all the legal wrangling involved..[4]

Regardless of the reason, Interplay claimed in an official statement that this was a mutually agreed decision, Steve Jackson, in a February 12, 1997, statement released through The Daily Illuminator on the Steve Jackson Games website stated that he wish he knew why Interplay decided to drop the license, and that no official correspondence to that effect was received by that date. It was a surprise to the Fallout development team as well.[5] In a subsequent meeting with Tim Cain, he made a lot of concessions to save the project and the implementation of GURPS created by the development team. However, the decision was handled by the executives of Interplay and Cain or the Fallout developers had no vote in the matter.[6] On March 14, 1997, Steve Jackson received a phone call confirming that GURPS was being dropped, as the development team was told to remove all licensed content and was too far along creating a replacement (SPECIAL) and redoing art assets for them to return to GURPS. The caller laughed when Jackson asked to receive a confirmation in writing, saying that he would "see" if he could send a formal letter confirming this. The unilateral dropping of GURPS after three years of cooperation soured Jackson's relations with Interplay.[7] 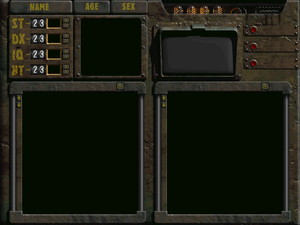 As Fallout is identical to the GURPS game in all but the character system, this article focuses on the implementation of the GURPS system. Recreation of mechanics bases on the GURPS Lite free source book and other available materials, like Roleplayer #8, Roleplayer #4, Roleplayer #1, and other online supplements released by SJG. It is important to note that for the purposes of the game, all social standing, appearance, and other variables usually listed in GURPS source books separately are instead divided into Advantages or Disadvantages.

The following screenshots come from the official press pack and demonstrate the GURPS interface.

An attribute of 1 is the lowest score, with no upper limit. 10 is the average ability and is the default setting. 8 to 12 is considered normal. 16 and above are unusual. Ratings of 20 and more are equal to superhuman ability.

A self-explanatory section. Unlike SPECIAL, GURPS has a lot of skills the player can acquire. According to available data, the player would have been able to select a total of 56 skills. This was cut down to just 19, a little over one third of what the GURPS builds, in the released game.

Indirectly, this also explains why the game seems slanted so heavily towards a particular playstyle, namely, a character with Speech tagged. Conversations which would normally require one of eight separate skills (estimation according to the purposes of various social skills in the game) just require one: Speech. There is no other skill that has such utility and versatility in the game.

These act like Traits, in that they help define the character. Advantages are explictly positive, while disadvantages quite the opposite. Most were merged into Traits or recycled into perks, if not verbatim, then the underlying principles.

Quirks are additional elements that define a character in GURPS. While the game files contain an image referring to them explicitly, it is unknown if they would be implemented, given that certain quirks, like Delusions, have been folded into disadvantages. 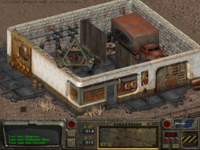 While the general gameplay between the games remains identical, there are some differences. For starters, the game still used the triangle menu for deciding on the type of interaction the player wanted to have with the target object or character.

Another difference is that there was a single item field divided into two halves, representing the player's hands. This indicates that it was, at one time, possible to fire two single handed weapons (hence the Ambidexterity advantage). Unlike the final product, where the player has two active item slots to use and allowed to freely switch between them, in the GURPS version the player would have to switch weapons by entering the inventory.

The SkillDex was completely different and allowed the player to view all of the skills, advantages, and disadvantages in a separate window, apparently assign them to six different quick use slots, and access the character sheet (it was not accessible from the main interface bar).

Interestingly, the screens also indicate that the player would be able to directly select the skill to use in a given setting, as well as allow the game to choose it for them (the Auto setting).

Combat was majorly different, due to the use of Fatigue Points (FT) on top of Hit Points, as well as including disadvantages that can severely cripple the character in combat - including Combat Paralysis.

There were also more options for calling shots, including aiming for feet and hands, the neck, and even the brain. The groin was referred to as vitals. Another interesting feature is that the game included many of the combat maneuvers that make GURPS famous (and slow to play), including Step & Attack, Step & Ready, Aim, Move, and so on and so forth. These were accessible through a button now used to access the SkillDex.

As part of Fallout's 10th anniversary celebration, The Vault has acquired two prototype images of the GURPS variant of Fallout, released to us by Chris Taylor. They come from a time when Scott Campbell still handled the game's design.