Fallout: New Vegas is an action role-playing video game developed by Obsidian Entertainment and published by Bethesda Softworks. The game was released on October 19, 2010 in North America, October 21, 2010 in Australia, October 22, 2010 in Europe, and November 4, 2010 in Asia. It is available on the Windows, Xbox 360, and PlayStation 3.

Even though it directly succeeds it in order of Fallout game releases and also shares its engine, Fallout: New Vegas is not a direct sequel to Fallout 3,[1] even though the game offers a similar action role-playing experience to Fallout 3. The game also marks the return of many elements found in previous Fallout titles; due to many employees of Obsidian Entertainment having previously worked for the now-defunct Black Isle Studios on Fallout, Fallout 2 and Van Buren (the cancelled Fallout 3 project by Black Isle Studios).

Fallout: New Vegas was announced on April 20, 2009 at Bethesda's London showcase.[2] The first official information was released in the February 2010 issue of PC Gamer. A cinematic teaser trailer and a gameplay trailer have been released, which can be seen below.

The entire project, from start to release, took just 18 months to complete.[3]

The game is set in and around a post-apocalyptic retro-futuristic Las Vegas, following the Great War between the U.S. and China as a conventional and nuclear war that occurred on October 23, 2077, and lasted less than two hours, despite causing immense damage and destruction. Before the Great War was the Resource Wars, during which the United Nations disbanded, a plague rendered the United States paranoid, and Canada was annexed. The city of Las Vegas itself wasn't hit as hard as most of the other districts, with most buildings being left intact as a result. The Hoover Dam supplies free electricity and water to those who control it.

The story has taken some parts from the Fallout and Fallout 2 stories, and is for the most part unrelated to its predecessor, Fallout 3.

Fallout: New Vegas takes place in 2281, four years after the events of Fallout 3, and forty years after Fallout 2. The New California Republic plays a major part in the game's story, being in a three-way struggle amongst the Caesar's Legion slavers, and the mysterious Mr. House that oversees the New Vegas Strip.

The Courier, the player's character, was meant to deliver a package from Primm to New Vegas. However, the Courier is intercepted by the Great Khans and Benny, who shoots him and takes the package, leaving the Courier for dead in a shallow grave. The Courier is later found by a robot named Victor, and is sent to the settlement of Goodsprings, where Doctor Mitchell saves his life. After the Courier is given some medical tests, the player is pushed back into the open world, and the quest, Ain't That a Kick in the Head, begins. Fallout: New Vegas has a definitive ending, unlike Fallout 3.[4]

Endings for Fallout: New Vegas are dependent on what actions the player took via quests during the game, with separate endings being shown for each major location, political faction, and recruitable companion.

The gameplay system is similar to Fallout 3 gameplay, although some changes have been made, one being changes to the combat system to make it feel more like a first-person shooter, including the ability to use weapon iron sights.

Hardcore mode is an optional setting which makes the game more realistic, with gameplay elements such as dehydration, hunger and sleep deprivation as well as non-instantaneous healing. If you choose against playing the gamemode, it can be turned back on mid-game. Either a trophy or achievement is awarded for completing Fallout: New Vegas on Hardcore mode, however, in order to earn it, the entire game must be played in Hardcore, from the point first prompted until the endgame sequence, without ever turning the setting off. The Casual/Hardcore mode distinction is independent of difficulty settings.

The SPECIAL system returns, and directly influences speech options and quests. Unlike Fallout 3, traits are available for taking, and perks are gained every two levels instead of every one, a move made by the developers to avoid creating overpowered Couriers.

The Vault-Tec Assisted Targeting System, or V.A.T.S., is an active pause combat system implemented in the game, just like in Fallout 3. While using V.A.T.S., the otherwise real-time combat is paused. V.A.T.S. also allows the gory deaths in the game to be shown in slow motion and great detail. Attacks in V.A.T.S. cost Action Points, and the player can target specific body areas for attacks to inflict specific injuries. During real time combat, you can now look down the iron sights of weapons, rather than the zoom in Fallout 3. Unlike Fallout 3, melee weapons now have special moves in V.A.T.S., often costing more AP, but dealing more damage.

New Vegas also brings back the Damage Threshold (DT) mechanic absent from Fallout 3. If an enemy has a high DT, some weapons may be ineffective. This is indicated by a red shield near the enemy's health bar when attacking it, both in and out of V.A.T.S. The damage threshold will be due to high armor or a built-in mechanic to that character, and will require the Courier to either retreat or attack with a more powerful weapon. Players also take much more damage in V.A.T.S. than in Fallout 3 (75%, up from 10%), which makes dying during V.A.T.S. a real possibility. Another new feature is the presence of a dynamic 'Kill Cam' which shows the killing bullet in slow motion, permitting players who prefer to play in real-time to experience the same cinematic feel of V.A.T.S. This camera can also be enabled/disabled at will, and is only shown on killing the last enemy of a group.

A modding feature allows you to modify your weapons by adding beneficial accessories such as scopes, extended magazines, silencers, and more. Weapons can have a maximum of three attached mods, and they cannot be removed once placed. Obsidian implemented this feature as a direct response to the popularity of the Weapon Mod Kits mod for Fallout 3.[5]

There are unique versions of weapons, a feature introduced in Fallout 3, but there are significantly less of them than in Fallout 3. Unique weapons tend to have increased damage, speed and other factors, have different textures, and some may even have unique models. Unique weapons cannot be modified, but they often have a modification already implemented. Their built-in abilities and higher damage output often make up for it though.

Karma returns in Fallout: New Vegas and is incorporated alongside a reputation system similar to Fallout 2.[4] Reputation is a form of tracking the players relationship with the many factions and towns of Fallout: New Vegas, such as the NCR or Goodsprings. A high reputation with a faction or town may give certain benefits, such as gifts from the people of that town, while a low reputation may lead to hits being taken out against you. Karma in has little effect in New Vegas when compared to Fallout 3; reputation is the primary factor as to how people will react to you.

A new companion wheel has been added to quickly and easily give companions commands such as 'Talk', 'Use Ranged Weapons' and 'Wait Here'. It also makes it easier to swap health and equipment. The companions also have their likes and dislikes; telling a melee-oriented companion to switch to a ranged weapon will result in a nasty remark and decreased effectiveness.

The city of New Vegas, as well as other smaller settlements in the game, have a variety of colorful casinos or other forms of gambling to explore. In Fallout: New Vegas, several gambling mini-games have been added, including blackjack, roulette, and slots. Outside the casinos, many people across the Mojave play Caravan, a card game designed by Obsidian specifically for New Vegas. Luck is a considerable factor when it comes to gambling. You get money for winning, and floor managers will congratulate you with food or drink and maybe a VIP stay at the hotel. Winning too much money after that, however, will make the managers come down, give you the customary "tap on the shoulder", and tell you to leave the casino on suspicions of cheating. This however will not remove your current chips, even though they would likely confiscate them as being "unfairly won" in a real casino. 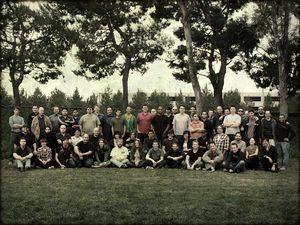 Fallout: New Vegas was developed by Obsidian Entertainment, a company founded by Feargus Urquhart and Chris Avellone, two of the makers of Fallout 2 (originally at Black Isle Studios). The project is led by J.E. Sawyer, one of the lead designers of Van Buren, the canceled Fallout 3 project by Black Isle Studios. John R. Gonzalez is the lead creative designer, while Obsidian founder Chris Avellone, who worked on Fallout 2 and Van Buren is a senior designer. Joe Sanabria is the lead artist.

Four story based add-ons - Dead Money, Honest Hearts, Old World Blues, and Lonesome Road - have been released. The pre-order bonuses were released as another add-on, Courier's Stash, as well as another add-on called Gun Runners' Arsenal.

Fallout: New Vegas had four different pre-order bonuses, the Classic Pack, Caravan Pack, Tribal Pack, and Mercenary Pack. Each one had a unique suit of armor and a unique weapon not found in-game, along with a few other items that are available within the game.

One of the Obsidian owners came up with the idea that you start the game by being shot in the head and dropped into a desert grave. It was my idea to end the game by resolving a conflict between NCR/Caesar's Legion at Hoover Dam. Everything else was developed by John Gonzalez.

One of the themes we identified early on for F:NV was "recreating the new world in the image of the old".

the reason why F:NV's extensive use of western trappings overlaps fine with the imagery of vegas is because the golden age of TV & film westerns was in the 50s and 60s, which was also the golden age of las vegas. we're already conditioned to accept these things overlapping. ~*

It was made relatively late in the project and I made it because the area designers were falling behind on area milestones and would not be able to complete both the core required content and post-game content in the remaining time. We did design post-game reactivity. We just didn’t have time to implement it.

Bethesda handled the budget, high-level scheduling, most of the QA, marketing, PR, music licensing, and all other publishing duties. All of the development was done internally, though some of the Bethesda F3 devs gave feedback on our design docs.