Fallout Tactics combat is more complicated than combat in Fallout and Fallout 2. The basic combat mechanics is similar, but there are some serious differences. Fallout Tactics features three modes of combat: Continuous Turn-Based (CTB), Individual Turn-Based (ITB), and Squad Turn-Based (STB). In CTB, everyone can act at the same time, and action points are regenerated at a rate based on Agility. ITB is the system used in the original games. STB is a variation of that; each turn is given to a squad. Other changes include the ability to change stance, modifiers for height, and setting sentry modes, which let characters shoot automatically in CTB upon encountering an enemy.

ITB is the game mode most like the previous Fallout games. All characters will move one at a time, based on their sequence statistic. Characters may not move out of order, with the exception of the delay action command, which will move a character farther down the sequence list. Once every character has had a chance to move, all characters will regain all action points and the turn will start over from the top of the list.

STB is a variant of ITB. In this mode, all characters for a particular player will get a chance to move at the same time. When all characters in the squad have moved, the next player or the computer will get a chance to act. When all squads have moved, the turn will start over from the top with the first squad. ITB and STB are collectively called Turn-Based mode, or TB.

There are three different stances: stand, crouch and prone.

Characters in lower stance shoot more accurate, are harder to hit and sneak more effectively. They can also use low objects as cover. Crouching sniper can be almost invulnerable when using a high ground.

On the other hand, characters in lower stance move slower than those in higher stance. Melee and unarmed attacks can't be done in prone stance. Characters attacking from a very close range against a prone target are more likely to do critical hits.

The game allows to assign sentry mode to each of squad members to manage their default behavior in CTB upon encountering an enemy. There are three different sentry modes - off, defensive and aggressive.

Sentry mode off: The character will ignore any enemy activity until receives no commands from player.

Sentry mode defensive: The character will alert you when an enemy is spotted by flashing their character tab. If this character is fired on, they will return fire.

Sentry mode aggressive: This character will actively fire on the enemy.

Characters on sentry mode will not fire if their chance to hit is lesser than the preset value. The possible values are: 95% (only fire if you’re almost assured of hitting), 66% (fire under good conditions), 33% (fire under possible conditions) and 1%. 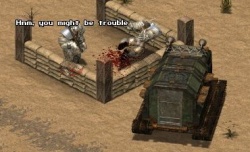 Fallout Tactics features many vehicles that can be occasionally used as a support in combat. While staying inside a vehicle squad members are protected from enemy fire by its armor and can shoot enemies (Gunner perk adds 10% chance to hit when firing from a moving vehicle). Vehicle can be then repaired using Repair kits and Repair skill. If a vehicle takes too much damage, it will become irreparable.

The character with the highest Pilot skill becomes a driver. He/she then can drive with effectiveness depending on their skill (Lead Foot perk adds 25% speed). Driver can't shoot while driving unless the Road Warrior perk is picked but can drive the vehicle to hit enemies and knock them down causing damage.

One vehicle in the game, Tank, has its own 75mm Tank gun. The character with the highest Big Guns skill becomes a gunner and can shoot tank gun which is added to their weapon slot.