All Quiet on the Western Front

In the Hub Old Town, the thugs guarding the Brotherhood initiate prisoner (quest-related) will attack you on sight and one of them will sometimes say: "Have you ever danced with the devil in the pale moonlight?", a recurring line of Joker in Tim Burton's Batman.[2]

The image and title of the perk Lifegiver is a Vault Boy presented in a manner consistent with representations of Jesus Christ.

The random encounter Unusual Call Box involves the player finding a blue telephone box; as the player approaches it, a light on top begins to spin and it dematerializes. This is the TARDIS, a time-traveling ship from the UK TV series Doctor Who.

In Frank Herbert's Dune, Mentats are humans trained to process information and calculations at speeds usually reserved for (banned) computers. The Mentats drug is named after them and the color of the pill is likely a nod to the red-stained lips of a Mentat, caused by consumption of sapho juice.

The "The attack crushes the temple. Good night, Gracie" critical hit message from Fallout is a reference to this show and the Good Night, Gracie legend.[4]

From Marvel Comics's The Incredible Hulk. 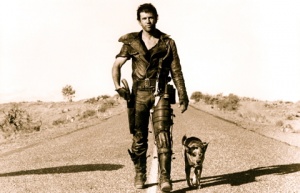 Mad Max, especially Mad Max 2 The Road Warrior, was an influence on the entire Fallout series; most obviously his dog and the design for the leather jacket (both the double sleeve and single sleeve variant).

Max in turn was influenced by Harlan Ellison, in his post-apocalyptic short stories A Boy and His Dog and Eggsucker, and his script for the graphic novel Vic and Blood.

The song Ismarc sings is a cultural reference to the Nine Inch Nails song "Head Like a Hole" which goes:

Planet of the Apes, The

The line "I can't believe those bastards finally did it. Damn them all to Hell." in Captain Maxson's diary is strikingly similar to Charlton Heston's famous outcry ("We finally really did it... You maniacs! You blew it up! Ah, damn you! God damn you all to hell!") from the final scene of the Planet of the Apes.[5]

Just outside the entrance to Vault 13 is a corpse. Examining the corpse provides the message: "You see Ed. Ed is dead." This is a reference to the line from Pulp Fiction's "The Gold Watch" story: "Zed is dead."[6]

Loxley, the leader of the Thieves' Circle is a reference to one of the names given to the famous outlaw Robin Hood: Robin of Loxley. Loxley's fake British accent and anachronistic clothing are part of the reference.

The intro movie shows a television with the brand name Radiation King, which is the brand of The Simpsons have in the home.

If Deputy Kenny in the Hub dies in battle, your character will exclaim "They killed Kenny! Those Bastards!" (Alternatively, if you kill Deputy Kenny, the message "You killed Kenny! You bastard!" will appear in the message box). This is a reference to the running joke of Kenny dying in numerous episodes of the popular TV series, South Park.[7]

When the Vault Dweller is trying to blackmail Iguana Bob Frazier, one of the dialogue options is to say "Prime Choice Select is made of people!!!! It's made of people!!!". This is a reference to Charlton Heston's famous line from the film Soylent Green.[8]

In a lot of buildings in Fallout (and Fallout 2) there are posters that are actually representing Maynard from Tool. The poster is part of the album art from the band's first album "Undertow" from 1993.

Camarillo and Gehenna are likely references to Camarilla and Gehenna in Vampire: The Masquerade RPG system.

Slappy, a peasant of The Hub says "Let's go play Global-Thermal Nuclear War".[11] This is clearly a reference to the motion picture WarGames.

Wonderful Wizard of Oz, The

Lucy in the Los Angeles Vault, quotes bThe Wonderful Wizard of Oz while pacing in her cell.[12]