From The Vault - Fallout Wiki
(Redirected from Fallout d20)
Jump to: navigation, search 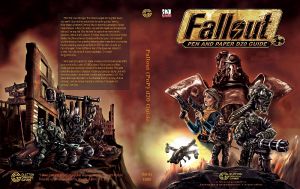 Fallout Pen and Paper d20 was a pen and paper role-playing game based on the Fallout computer games developed by Glutton Creeper Games. Because Bethesda threatened Glutton Creeper with legal action, they were forced to change the game into a generic post-apocalyptic RPG called Exodus.

On June 10, 2006 GCG finished contract negotiations with Interplay for a license to create a d20 Modern OGL setting for Fallout. The products announced by Glutton Creeper were the Player's Guide, the Campaign Guide and the Organization Companion Guide.

On May 8, 2007 ZeniMax Media/Bethesda Softworks threatened to file an injunction against GCG for damages, should they not cease and desist production of Fallout PnP d20 products. They stated that Interplay never had the rights to license a Pen and Paper to GCG under their license of Fallout from 2004 before the purchase of the IP. They also claimed that it may damage the Fallout brand and the Fallout 3 release by linking the two. As a result, the Fallout d20 page on GCG website was removed.

On June 19, 2007 GCG finished the conversion of its Fallout d20 project to another post-apocalyptic PnP setting named Exodus that encompasses the Southwest of the United States (to include New Mexico, Arizona, California, Northern Mexico, Utah, and Nevada). They made it generic enough to use in any setting, but had added a new storyline that is based on a classless system. There were two classless options to choose from (aggressive and non-aggressive), which determined Base Attack, Save Bonuses, Hit Die, and so on. Backgrounds, Occupations, Race and Tag Skills determined class skills. All characters got a background and could choose to take an occupation. Traits were present with all of the classics from Fallout, as well as many more new options.

Two samples of the Player's Guide were presented by Glutton Creeper. One of them consisted of background info, and the other was a description of Traits. Both were criticized for inconsistency with Fallout canon. Due to criticism, the initial cover design presented by GCG was redone to make it more consistent with the Fallout setting.