The Fallout setting is an unique, retrofuturistic creation influenced by numerous sources. This articles aims to provide a summary of the inspirations for the setting. For more in-depth presentation of the Fallout world, see the related article.

The divergence concept allowed the development team creative freedom to develop the game as they saw fit. The core idea was a dark game, based on the horrors that 1950's science had predicted for a future apocalyptic world, balanced with humor.[1] This has influenced all levels of development, first and foremost the art style and the technology of the setting.

Aesthetically, it is a future inspired by what the people of the 50s thought it would be: Road cruisers with an Art Deco aesthetic and fins, dominant Art Deco, Googie, and Raygun Gothic[2] architecture (Brutalist, Usonian,[3] steel constructions, Lustron, Neoclassical, American colonial, Federal, and Victorian as well), reel-to-reel computers, big, bulky power armor (inspired by Wasteland and Starship Troopers), large and clunky robots, and so on and so forth. The idea was pitched by Leonard Boyarsky and eventually accepted by the team.[4][5]

Seriously, the artists just thought that 50's tech looked cool. So they set out to make a future science that looked like what the Golden Era of science fiction thought that future science would look like (if you can follow that sentence). Vacuum tubes, ray guns, mutants, the whole works. And I think they succeeded quite well.

As can be seen in the above quote, the technology of the setting were dictated by the technology and fiction of the Golden Age of Science Fiction, namely the 1950s. As such, Fallout included vacuum tube electronics, rather than the integrated circuits popularized in subsequent decades, ray gun energy weapons, giant mutants, the whole nine yards.[10] The aforementioned 1956 movie Forbidden Planet was shown to artists as a summary of what the technology of Fallout should look: An honest 1950s vision of the future, with clunky robots, ray guns, and the general "feel". Some elements came from much later movies, as is the case with the T-51 power armor, inspired by the armor worn by thugs from The City of Lost Children (1995).[8]

However, the setting isn't meant to accommodate every bit of junk science that comes to mind. Scott Campbell specifically introduced the Forced Evolutionary Virus to provide a more plausible explanation for the more stunning mutations found in the setting, without handwaving it as the "power of radiation", which would harm versimilitude.[11]

The nuclear Armageddon in the back-story was between the US and China. After shipping several people asked me why China and not the old standby, the Soviet Union. I made the choice when I remembered experiences with Oleg, a Moscow developer I worked with months before when I was assistant-producing a typing game. Once, in the middle of a phone conversation, I heard some muffled bangs, and the phone went quiet. When I asked him what the noise was, he replied, "Oh, it was just the Russian mob firing their guns in the street." I thought he was joking - he wasn't. After that, I had a really hard time believing that the once mighty USSR would be in a position to threaten the world any time soon. So I turned to the next major communist country that typifies "the East": China.

While Fallout is based on the future visions of the 1950s, it is not the 1950s transposed to the future. One of the most noticeable changes is the replacement of the Soviet Union with China as the communist foil to the capitalist, democratic United States. As pictured in the above quote, Scott Campbell believed the post-collapse Russia could not be a convincing arch-enemy of the United States. The Dragon, however? Considering the 1980s and 1990s concern about East Asian countries dominating the global economy, it was very plausible.[12] Interestingly, the political situation did not parallel real world developments. The hardline policy towards China mimics the U.S. foreign policy of the 1950s and the 1980s, with Fallout 3 and Fallout 76 emphasizing the MacCarthyist and HUAC aspects of the setting, following the example of Van Buren.[13] The Soviet Union also existed as late as 2077, whereas in reality, it collapsed in 1992.[14][15] 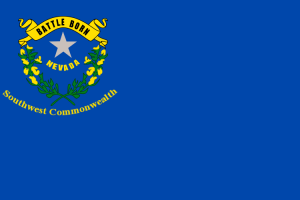 The Nevada state flag.
(Note the addition of "Southwest Commonwealth" in the left canton).

Domestic politics of the United States were an interesting modification of real-world tendencies. By 1969, the 50 states of the nation had been unified into 13 super-states, the commonwealths.[16] The real reason behind this was because Leonard Boyarsky believed the design was cool and illustrated the changed America much better.[17] This was not elaborated upon until much later, in Van Buren and after its failure, Fallout 3, Fallout: New Vegas, Fallout 4, and Fallout 76.

My idea is to explore more of the world and more of the ethics of a post-nuclear world, not to make a better plasma gun.[18]

The society of the Fallout setting is an interesting mix of contemporary and modern elements. The pre-War society was inspired by 1950s Americana, including widespread consumerism, fascination with technology, staple 1950s TV Dinners remaining popular, fervent patriotism and anti-communism, though notably, it lacks the many less appealing elements of the time. There was no institutionalized racism, widespread anti-feminism, or suppression of sexual minorities in pre-War America.[19] Gender stereotypes were still present, though did not constrict one's life to the same degree as in the 1950s.[20]

In general, the post-nuclear society is far more egalitarian than the source material would imply, reflecting modern sentiments and tendencies. Women fight alongside men, occupy positions of influence, and even serve in armies on equal terms. Racism is conspicuously absent in the games, replaced by hatred towards mutated humans.[21]

The culture of the Fallout universe is that as envisioned in the 1950s, in essence modern Americana. Although the subculture movements, like Hippie, Beatnik, and Punk were absolutely around, their movements just never materialized as mainstream.[22]

We often develop technology not because it's great immediately, but because developing that technology helps us move toward its potential. We've had various forms of hybrid vehicles (gasoline combustion engine + ???) around for a long time. Most of them were pretty bad and impractical. We've had biofuels around for a while, but most of those are STILL bad and/or impractical. We saw tanks developed in WW1 that were absolute garbage.

All of those things were kind of crummy for a while, but if we hadn't gone through the stage of "Yeah... this is... okay, I guess," we would never have reached the subsequent stages. Coil/rail gun technology used to be completely impractical. Now it's reached the stage where maybe/sorta we could mount an enormous one on a destroyer and blast through a bunker with a huge slug from miles away. We're probably not going to have Eraser- or Fallout-style Gauss rifles for a while, but we see the potential.

In the Fallout universe, I think that the military appeal of weaponry that uses a small number of more-or-less universal ammunition types would be great. Today, we have NATO standards so that allies armies can share ammunition. But what if you could use the same ammunition type for powering a sniper rifle that you'd use for a devastating close-range weapon (e.g. a Microfusion Cell powering a Laser Rifle or a Plasma Rifle)? For a military force in the field, the flexibility of that would be immense.

Anyway, I considered the EWs in F:NV to have reached the point where they were starting to replace conventional weapons, but had not yet completely eclipsed them -- sort of like the early days of firearms, when they were still being used concurrently with bows.

”— J.E. Sawyer on energy weapons in the Fallout universe
“

I like vacuum tube tech and I think it pushes some interesting ideas, but it feels secondary in the series. One of the interesting properties of vacuum tubes is that they aren’t really affected by EMPs, such as those produced by a nuclear bomb blast. Some Soviet MiG-25s used vacuum tubes dominantly or exclusively, which would theoretically allow them to fly in the wake of a blast (assuming the pilots weren’t killed by radiation).

Still, the robots in the series are affected by EMP grenades and similar attacks, so the state of technology isn’t represented consistently.

”— J.E. Sawyer on the state of technology in the Fallout universe