Special encounters in Fallout are, as the name suggests, extraordinary occurrences the player may stumble upon during their travels through the wastelands. For regular random encounters, see this article.

Special encounters occur with a frequency determined by Luck and any special perks the player has. Most of these are for entertainment purposes only. 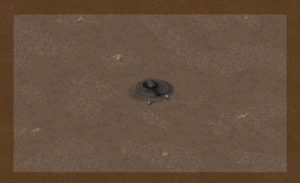 "Hey! They're really out there."
Main article: Alien Ship

This encounter features a crashed flying saucer marked as the property of Area-51, with two dead aliens. The bodies carry the Alien Blaster and a fuzzy painting of Elvis. It's a reference to classic 50s movies and conspiracy theories surrounding the military base. 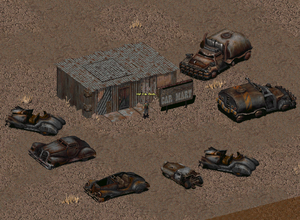 "You stumble across some wrecked cars in the middle of the wasteland."
Main article: Bob's Pre-owned Car Mart

A junkyard featuring junked vehicles for sale. Bob's not much help, but his house contains two air rifles: The Red Ryder BB Gun and its limited variant. The rifles are a double reference to Wasteland and A Christmas Story. 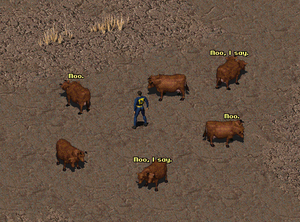 "You come across a heard of wild Brahmin. You feel there is something wrong..." Quoted verbatim, error appeared in the original source 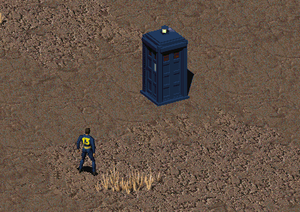 A blue police box that will activate and disappear upon coming closer, leaving behind a motion sensor. It's a reference to the British sci-fi series, Doctor Who. 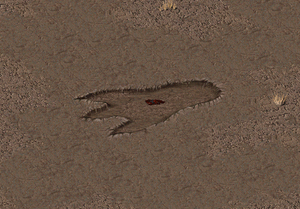 Godzilla's footprint with a crushed peasant underneath, carrying a Stealth Boy. References an animated short called Godzilla vs. Bambi. 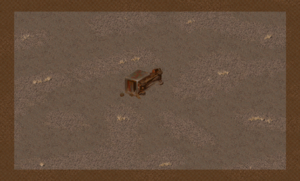 "You see an overturned truck in the distance."
Main article: Nuka-Cola Truck (encounter)

A Nuka-Cola delivery truck that crashed long before the Great War. The crate carries a Luck-dependent bounty of bottle caps, doubled by the Fortune Finder perk.