You'd be surprised at what's in demand out there. Something that's taken for granted in one place may be a highly sought after commodity in a settlement 10 miles away.

Far Go Traders is a merchant house of the New California Republic, tracing its roots to the 22nd century and the thriving trade that developed among the communities of New California. 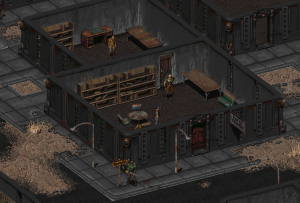 The main caravan office in the 22nd century Hub.

In 2161, the Far Go Traders was the smallest of the three major trading houses that ruled the Hub. Dealing primarily in goods considered small time,[1] the FGT managed to build a thriving merchant house. Chems, tires, guns, bullets, food, brahmin, dirt, even scraps of metal were loaded into their caravans and traded among the communities of New California, according to the philosophy that nothing can be taken for granted: Goods commonplace in one settlement might be luxury goods in a settlement just 10 miles away.[2] By expanding their business in this fashion, the Traders developed a very large operation: Large enough that harvesting operations by the Master's forces did not hurt the company much (only a small percentage of their business), even though they lost a lot of caravans to the Scavenger Teams.[3]

Having survived in the cutthroat environment of the Hub, the Traders survived and prospered. By 2281, more than 120 years later, the Traders are large and influential enough to compete with Crimson Caravan for the new armor contract for NCR Army troops.[4]

In 2161, the trading house was run (officially) by Butch Harris, with Rutger as his aide. Considered to be an honest trader with a mind for honest work, he was unable to curb Decker's influence and the FGT ended up falling under control of the crime lord.[5] The string of caravan disappearances has annoyed Decker, but he has allowed Butch to handle it his way for the time being.[6]

Butch preferred a hands-off approach to business. His employees were expected to bring their own weapons and ammunition for caravan guard duties and any special jobs that needed doing,[7] while managers of businesses owned by the trading house, like Beth's Weapon Shop, were given plenty of freedom and de facto autonomy to run things as they please. A key element of any employment contract was a provision that allowed FGT contractors to buy items at a 15% discount from businesses owned by the company. Coupled with the fact that they pay well and their jobs are reasonably dangerous, it allowed for them to stay in business as a fair, dependable trading house: Not as crazy as the Crimson Caravan of the time, but not as exploitative as the Water Merchants.[8]

As a result, they were very popular with caravan guards, commonly considered to be the best house to work for. The fact they didn't take unnecessary risked and were pleasant to work with was a big plus.[9][10][11]

As a major trading house, the FGT are in natural competition with the other merchants houses of the New California Republic, in a rivalry that stretches back decades. The hostility between the caravan companies results in constant attempts to undermine each other and limit business. Capitalism at its finest.

The FGT, like other merchant houses, prefer inexpensive, reliable technology, although by 2281, they have access to the resources and manufacturing required to produce large numbers of standardized armor sets designed for use by NCR Army servicemen.[4]

Far Go Traders is a reference to Brian Fargo, founder and CEO of Interplay (at the time when Fallout was released) and one of the designers of Wasteland, the spiritual predecessor to the Fallout series.