Fatigues are a type of uniform used as combat uniforms, as opposed to dress uniforms worn at parades and functions. Fatigues are generally camouflaged, either in monochrome such as a shade of green or brown to approximate the background, or in a disruptive pattern. 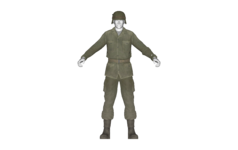 The fatigues consist of a durable, weatherproofed four pocket field jacket that reaches down to the thighs, a pair of trousers with cargo pockets, and a pair of double-buckled, laced combat boots. By default, it comes with an olive drab, solid color camouflage pattern and is intended to be worn with either the basic Army helmet or the complete combat armor system.[1]

A pre-War Army uniform that has been extensively modified, these military fatigues have been provided with an additional pocket on the left arm and show the traces of countless repairs. It has several subtle differences as compared to the standard Army uniform, most notably different pockets, collar, and the introduction of an improvised camouflage pattern.[2]