Fire ants are creatures living in the Capital Wasteland in 2277. They are a variation of giant ants that have been genetically modified, their name comes from their ability to breathe fire.

The following section is transcluded from fire ant. To modify, please edit the source page.

The fire ants of the Capital Wasteland were created by the scientist Doctor Weston Lesko, in a botched attempt to return giant ants to their normal size through genetic manipulation over time. His plan specifically was by way of injecting the eggs directly with the mutagen using his Protectron.[1][2][3][4][5][6] However though his hubris[7] he set up his experiment in a non-controlled environment and rushed his procedure,[8] not only using FEV as a catalyst for mutation but also by injecting the Queen Ant directly.[9] With a complete misunderstanding of the FEV believing it would last for years.[10] One such mutation was their newfound ability to breath fire; specifically their venom became flammable and learned to ignite it with a spark made by clicking their mandibles. Upon discovery Dr. Lesko named it "pyrosis",[11][12][13] unbeknownst to Lesko the other mutation was increased intelligence.

With the ants increased intelligence they quickly expanded into the wasteland, first into Grayditch via Marigold station, overrunning the town and killing its inhabitants, sans Bryan Wilks. Writing the whole episode off as a "small error" and blatantly shrugging off the lives lost to his abominations both for saving more lives long term and for the betterment of science. In any case Those! ants may have been contained after the aforementioned quest of the same name. It is unknown how fire ants came to be in the Mojave Wasteland, it could have been a similar mutation to that of the fire geckos native to the southwest. 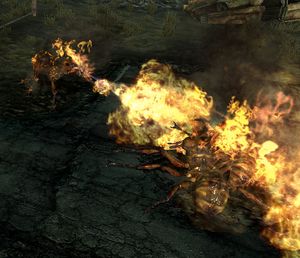 Frenzied fire ants killing each other.

Fire ants have a hard, red-orange carapace that protects their body from environmental factors. They live in enormous underground colonies where they eat, sleep, and mate with the queen. Fire ants are omnivorous, using their pyrosis to kill live prey, but also eat what little vegetation they can find, when necessary.

Fire ants like to attack from range with a fire breath attack (which has surprisingly long range). The ants seem to have a minimum range at which they could breathe fire. If you get extremely close to the ants, they will constantly try to move backwards, letting off a spurt of flame or two. Additionally, they have a slow turn speed.

If their antennae is hit and crippled, they will become frenzied. Once a fire ant becomes frenzied, it will attack other nearby fire ants and other non-player characters. Once attacked by another ant, the attacked ant will return fire, damaging the attacking ant.

Due to their high fire resistance, fire damage based weapons like the flamer and the Shishkebab will have little effect on them.

Fire ant nest guardians are unique versions of fire ant warriors. There are only five of these ants protecting the queen. Dr. Lesko refers to these ants as "The Queen's Quintet".

Fire ant soldiers are the second lowest ranked ant in the fire ant colony. Their job is to protect their area from intruders. They are very aggressive and will attack humans, as well as other creatures on sight. They are relatively easy to defeat at a medium level.

Warrior fire ants are the predominant variety of ant you will encounter in the Marigold Metro tunnels. They have a high amount of HP and high attack damage.

Fire ant workers are the backbone for the ant community's infrastructure. As the name implies, they dig tunnels and care for the eggs. However, they will attack intruders if they are threatened. They are relatively weak compared to fire ant soldiers.

This ant queen found in the queen ant's hatchery. Like others in the game it is slow and has a ranged acid spitting attack that does a fair amount of damage. She cannot spit fire because Doctor Lesko's experiment affected only latter generations of ants. The queen has a very high amount of HP and is considered a "boss" enemy in the game.

"Pyrosis" is actually the medical term for heartburn.