The First Battle of Hoover Dam is the colloquial name applied to the first offensive mounted by Caesar's Legion against New California Republic forces entrenched at Hoover Dam in 2277. It was one of the turning points of the NCR-Legion War.

With the discovery of the Hoover Dam by Ulysses, Caesar focused the Legion on taking it, as a symbolic Rubicon to be crossed on the way to conquering the Republic, his "Rome". His army of 66[2] reformed tribes undertook preparations for the battle, which included deep raids on NCR territory by small groups of skirmishers and sabotage campaigns by the Frumentarii.[3]

After three years of occupying the Mojave, the NCR still had a tenuous grasp on the region, in no small part due to skirmishes with local tribes and the dramatic Operation: Sunburst, which broke the Brotherhood of Steel strength in the Mojave. These problems were further amplified by weak supply lines: the delivery of a package from Navarro to the Divide awoke the nuclear missile silos in Hopeville and Ashton, triggering their launch. The resulting cataclysmic event literally tore the earth apart, turning the entire region into a killing zone. Reinforcements and traders could no longer take State Route 127 to reach Vegas and NCR positions. Along with the Big MT, a wall to living creatures, only the I-15 was left as a supply line. This resulted in a major slowing down of reinforcements and resupply for the NCR forces in the Mojave.[4][5][6]

As such, the Legion has faced a severely weakened New California Republican force at Hoover Dam. To further exploit this weakness, Caesar launched flanking attacks against Camp Golf[7] and other NCR outposts along the Colorado River, although the bulk of the Legion's forces was focused on the Dam itself.

The Legion, under the Malpais Legate opted for a direct attack. After first contact was made and casualties manifested on both sides, General Lee Oliver ordered his troops back to the middle of the dam. Graham responded by pushing all his forces onto the dam, raw recruits up front, veterans at the back, in accordance with the Legion military doctrine.[8]

This proved to be a mistake, as Oliver's entrenched troops put up a fierce resistance, refusing to give a single foot to the enemy. With the Legionaries halted, the sharpshooters of 1st Reconnaissance Battalion and the New California Republic Rangers were given the order to pick off Legion veteran officers. After a minute of such an attack, with officer casualties mounting and chaos sown among the front ranks, Graham ordered the rear guard veterans to push through to the front and rush the ridge, where the sharpshooters were located.[8]

This move caused further chaos among the younger legionaries and a total breakdown in the chain of command. Oliver's troops fell back to the side walkways, letting the veterans pass through to the ridge. By the time the legionaries reached the ridge, the sharpshooters were already in Boulder City. The veterans gave pursuit, but when they reached Boulder City, 1st Recon and Rangers already pulled out.[8] The entire city was a trap, filled with explosives. The blast killed most of the legionaries within, while those that did not die, were in no shape to defend themselves. Without officers, the legionaries at the dam were disorganized and disoriented, which allowed NCR forces to rout them. The Legate withdrew the remaining legionaries and retreated back to the Grand Canyon, to Caesar.[8]

When Graham returned to Caesar, the latter had no choice but to punish him, to show that failure will not be tolerated, even at the highest levels. The Praetorian guards were ordered to cover Graham in pitch, set him ablaze and throw the ex-Legate into the Grand Canyon. The sentence was carried out.[9] Graham was replaced by the brutal Legate Lanius,[10][11] who temporarily changed the focus of the Legion, expanding eastwards to claim further tribes for Caesar, before another attempt at taking Hoover Dam would be made.[12] 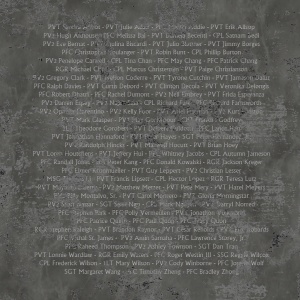 The NCR, in turn, after securing the dam and burying their dead, firmly established their hold on the region, moving in more forces and fortifying key positions throughout the Mojave. Pursuing the retreating Legion has been ruled out, due to the difficult situation with supply lines. The Divide and the Big MT greatly limited the ability to reinforce troops at the Mojave front, denying the NCR the use of State Route 127 and forcing it to rely on the Long 15.[5] If it wasn't for that, the Republic would've pursued Caesar's army and the aftermath could have been even worse for Caesar.[4] Despite heavy losses having been inflicted upon the Republic's Hoover Dam garrison (107 soldiers and Rangers), the victory was celebrated throughout the Republic. To honor those lost in the battle, a memorial was erected outside of Boulder City.[13]

The Rangers have been credited with victory by the public, as it allowed the NCR to defeat a foe that stood a real chance of defeating the Army in a head-on clash.[14]

The praise received by the Rangers had an unintended effect, a severe case on inter-service rivalry. General Lee Oliver believes that he and his men were denied proper credit, despite losing 25 times more men than the Rangers (103 soldiers dead as opposed to 4 Rangers), with many more wounded. Determined to reclaim their honor, General Oliver is fixated on implementing his own defensive strategy and tends to do the precise opposite of everything Hanlon recommends, so that he can take full credit for the defense.[15]

Despite the defeat, the Legion continued to harass NCR forces on both sides of the Colorado, eventually securing its eastern bank for themselves, after the Battle of Willow Beach and Arizona Spillway. However, it was not until 2281, four years later, that the strengthened Legion, with 14 additional tribes behind it, attempted to conquer the Mojave again during the Second Battle of Hoover Dam.[16]

The First Battle of Hoover Dam is mentioned only in Fallout: New Vegas.