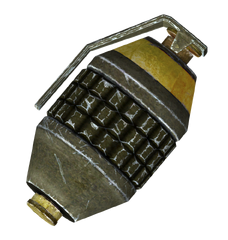 The flash bang grenade is a scripted weapon in Fallout 3 which causes its victims to be stunned.

It is encountered during the escape from Vault 87. The Enclave deploys it against the Lone Wanderer, knocking him/her out in order to transport the player to the Raven Rock prison facility. There is no way to avoid capture by the Enclave once the grenade has gone off, as it triggers a scripted event.

You can get close enough to see what the grenade is, but you cannot pick it up. The only option you have is "Activate". Using the console to add this grenade is possible, but attempting to use it will either crash the game, or immediately start The American Dream.

It uses the same world model as a regular frag grenade.