Flick's Slum is a devastated pre-War store in The Den, run by Flick, who also gives a number of addicts a place to crash. 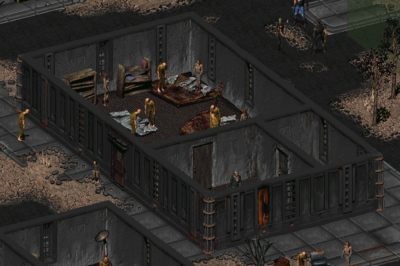 Once a pre-War Kwik N Save convenience store,[1] over a century of neglect has left the building in poor condition. Calling it a ruin would be generous.

Most of the shop furnishings are long gone, with rotten mattresses and dilapidated bookcases occupying the main room, where the addicts and beggars sleep. The two rooms on the southern face of the building are occupied by Flick, the "proprietor", who sells goods of dubious origin.

A pair of orphans at the entrance steal goods from anyone coming to visit Flick. Beware.

Flick's Slum appears only in Fallout 2.