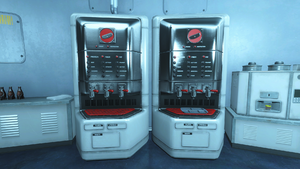 A pair of Institute synthesizers in the commissary.

Food synthesizers or food extruders are special machines created before the Great War to provide humans with a convenient, inexpensive source of nutrition. Used primarily in Vaults, they provided the dwellers entombed within with a nutritionally balanced source of food. Of course, Vault-Tec also experimented with the synthesizers, either not providing enough of them to supply the entire population of select Vaults[1] or rigging them to provide a sub-optimal food supply - such as a thin, watery gruel in lieu of proper nutrition.[2]

The Institute perfected this technology over the years of its seclusion, creating robust machines that could provide a much more varied supply of food. Although they still have the consistency of paste, Institute dwellers can select the type and taste of their food. Options include protein (beef, ham, chicken, and bacon flavors), fiber (lettuce, spinach, broccoli, and fruit), and fat (peanut, butter, icecream, and grease), and form the backbone of their food supply.[3]