Whoa, those things come in kits now? The good book don't mention that.

The Garden of Eden Creation Kit (G.E.C.K.) is a terraforming device created by Future-Tec, a division of Vault-Tec Corporation, to ease the process of harnessing the post-nuclear wasteland for the Vault dwellers.

Created by Doctor Stanislaus Braun, the Kit exists in two variants. The basic kit is a less advanced, but more commonplace Kit that contains basic amenities needed to harness a Vault to establish a post-nuclear settlement. The advanced version is effectively unique matter recombinator designed to recombine matter into a fertile, virgin landscape. Both versions of the Kit have the appearance of a silver briefcase emblazoned with the letters "G.E.C.K.". The basic G.E.C.K. was supposed to be standard equipment for all Vaults.[1] 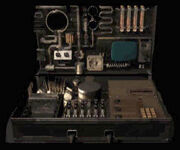 The Garden of Eden Creation Kit

According to Vault-Tec advertisements, the kit contains all the seeds, fertilizer, and other equipment (including a cold fusion power generator and a basic replicator) necessary to start a new settlement in a post-nuclear world after emerging from a Vault shelter.[3] In practice, a G.E.C.K. contains a fertilizer system with a variety of food seeds, soil supplements, and chemicals that can fertilize arid wasteland (and possibly selected sections of the moon's surface pre-conditioned to accept the G.E.C.K.) into supporting farming. The GECK is intended to be "disassembled" over the course of its use to help build communities (for example, the cold fusion power source is intended to be used for main city power production), and so on. Anything else people need, they are meant to consult the How-To Books/Library of Congress/Encyclopedias in the G.E.C.K. holodisk library for more knowledge. The little pen flashlight is just the cherry on top.[4][5][2]

The G.E.C.K.s were designed to be used relatively soon after the war, as the seeds and soil supplements they contained dated rather quickly. Furthermore, since the pre-War scientists had no idea how the post-nuclear world would look, the Kits were woefully out of tune with the post-nuclear world. However, if used by people with the necessary technical knowledge, the G.E.C.K. could be a powerful tool, especially if it was combined with the resources and infrastructure of a Vault.[6]

Other information provided by the G.E.C.K. includes basic force field schematics as well as info on how to make adobe-type buildings from the landscape (or create chemicals that can create "sand-crete" walls).[7] Furthermore, the GECK contained codes that allowed the Vault to create more varieties of jumpsuits (and weatherproof gear) from their dispensers, which they could do anyway before the GECK. It's possible the GECK contained other codes that could unlock more functionality within the Vault computers that weren't initially available because they would jeopardize the survival of the Vault if they were used or scavenged (or else they would interfere with the Grand Experiment). The GECKs also allow the Vault inhabitants to disassemble sections of their Vault (or take extraneous systems from the Vault) to create new homes and defensive structures on the surface.[8]

If chosen to receive a G.E.C.K.,[9] a Vault would be issued two standard G.E.C.K.s.[10][11] Vault 8's extra G.E.C.K. got swapped (whether by accident or some nefarious scheme, this is not known) with Vault 13's surplus water chips that had been ordered as backups.[10]

The unique Garden of Eden Creation Kit provided to Vault 87 is a device capable of radically altering the Wasteland and transforming dead, irradiated soil into viable land suitable for farming. It does so by collapsing all matter within its given radius and recombining it to form a living, fertile landscape[12]

Unimportant to the main plot, the GECK is merely mentioned in Vault Dweller's Survival Guide (Fallout's manual) in an advertisement describing the GECK's features.

The GECK is supposed to be the miracle cure for the town of Arroyo, revered by the tribals as a pre-War artifact that can put an end to their drought. The reality is somewhat different than their expectations, as the GECK is a device that can help kickstart a settlement, though it requires trained hands to operate and ideally a Vault. Without it, the results can be less than stellar.

Opposite of Shady Sands is Vault City, founded with the GECK and Vault 8, resulting in the creation of an "utopia". The settlers of Shady Sands in 2122 also had a GECK, could not use their Vault as source of resources, meaning that the GECK could only help kickstart their agriculture and harness the land the hard way.

I must say that there are some who doubt such a device really exists, let alone works.

The advanced G.E.C.K. is, as stated above, a matter recombinator and is a crucial component of an unspecified stage of the purification process in Project Purity. It is the objective of the Finding the Garden of Eden quest in the game. The player can activate the GECK, though in doing so, they trade the life of their character for a fertile wasteland. 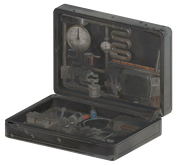 Vault 94 was issued one GECK for the purpose of recolonizing the Earth one year after the Great War. However, Vault 94 was also under the leadership of non-violent, faith-based commune which made them an easy target for the raiders of the Savage Divide. Vault 94 quickly fell to raiders who wanted nothing more than all their valuables. Once finding the GECK, however, the raiders were perplexed by the radiation it was giving off and decided to destroy it out of impatience.[13] The resulting explosion would create The Mire region in Appalachia. The GECK wouldn't stop functioning after the explosion though and would continue to spew a massive amount of radiation for years to come.

INTRODUCTION TO THE G.E.C.K.
The Garden of Eden Creation Kit (G.E.C.K.) is Vault-Tec's newest and most advanced survival technology. Developed by Doctor Stanislaus Braun, Director of Vault-Tec's Societal Preservation Program, the G.E.C.K. is a fully self-contained terraforming module capable of creating and sustaining life, even amid a desolate nuclear wasteland.

The G.E.C.K. includes a cold-fusion power generator rated to last at least 1000 years, matter-energy replicators, water purifiers, atmospheric chemical stabilizers, and seed and soil supplemements. Even in the event of total global annihilation, a properly functioning G.E.C.K. will create an earthly paradise.

Both of these games would include GECKs contaminated with radioactivity, causing them to create mutated flora and fauna that would consume massive areas of land and be central to the story, acting like the advanced GECK.

In Tactics 2, nothing is known about the GECK, as the game never left pre-production. The GECK in Brotherhood of Steel 2 was found by a former Jackal called Miles Reese.

The Fallout 3 SDK (Software Development Kit), called "The G.E.C.K.", has been released and is up for download at the official Fallout 3 website. It is also available for Fallout: New Vegas.