Golden Globes is a pornography studio that operates out of New Reno around 2241.

Run by the Corsican Brothers (of whom there's really only one) and under the protection of the Mordino Family, this filmhouse is purported to be the only such studio still standing in the post-war world. It began when the Corsican Brothers found holographic recording technology in the rubble of New Reno, or at least enough of it to restart the studio.

if you have Kama Sutra Master

if you have Sex Appeal

if you are a Sexpert 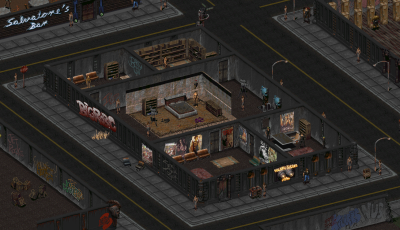 The building for the studio consists of five rooms, or sections:

Golden Globes appears only in Fallout 2.

Some of the names of the movies produced by The Golden Globe are spoofs of actual movies and the Fallout series: