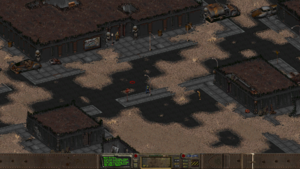 Downtown Boneyard. The Vault Dweller stands on the curb, with the hex-shaped movement cursor on the asphalt. 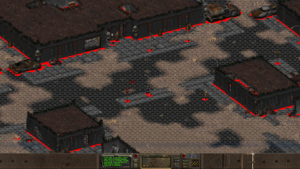 Same scene, except showing the underlying hex grid. Red hexes are occupied by scenery, other characters, or marked as blockers.

Hex (short for hexagon) refers to the cells that make up the hex map forming the basis of every location in Fallout, Fallout 2, and J.E. Sawyer's Fallout Role-Playing Game. The hex map has been abandoned in Fallout Tactics and Van Buren, in favor of non-grid movement and weapon ranges.

Each map is subdivided into a hexagonal tiling, which is used by the engine to determine movement, weapon range, line of sight, and so on and so forth. In order to interact with characters and scenery, the player needs to be on an adjacent hex. Talking is the exception, as it can be initiated at range.

In combat, all characters move at a rate of 1 Action Point per hex (a crippled leg increases the cost to 4 AP per hex; if both are gone, the character is immobilized).

Each weapon's range is also measured in hexes. Generally, the further away a target is, the lower the chance to hit. If a character is beyond the weapon's range, it cannot be attacked at all.

As a rule, unarmed and melee weapon have a range of 1 hex, meaning the character next to be right next to the target to attack. The sole exceptions are spears and sledgehammers, which have a 2 hex reach.