Hidden Stuff in the Fallout 76 Teaser 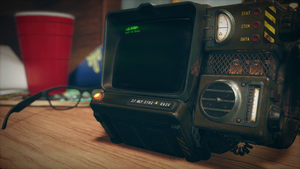 Everyone's watching the trailer and speculating, as the rumor mill grinds endlessly in the background. Fallout 76: A Rust style online RPG? A new chapter in the saga? Fallout Scrolls Online? Fallout Lemmings?

Whatever it is, we took a closer look at the trailer to look for cool stuff lurking within. Here's what we found. 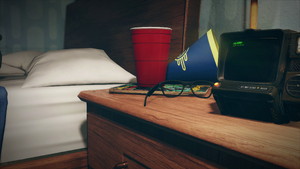 Apart from the obvious Pip-Boy and the cup, you can make out the cover, faintly. It's a pristine edition of The Unstoppables issue featuring Manta Man fighting the Commie-Kazi: 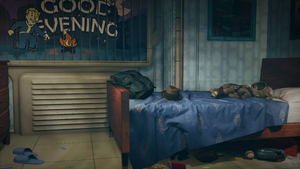 It's a messy room, no doubt about it. If you peek under the bed, you can make out a watch, a radio, slippers, a repair box, a toy Vault-Tec van, and in a blink-and-you'll-miss-it, an issue of Scouts' Life, a new periodical and perk mag for Fallout 76.

Oh, and we're not noting all the similarities with Fallout 4. Kind of obvious why, no? 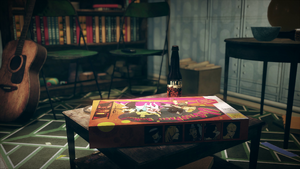 Hey, is that a game board focusing on The Unstoppables? It sure is! Unstoppable Shindig is for five players and was created by the Don't Be Bored Games Company, also responsible for Blast Radius! Also note the Oak Holl-- Lager beer, a new addition for purveyors of alcoholic drinks.

Hey, is that a Mark 28 bomb model there? It's not the mini nuke, but rather, the bomb model you liberate at sentinel site Prescott and carried around by suiciders. There's also the red Zip, a rather terrifying mascot head we'd rather not stare at for too long, and a hefty collection of tabletop games (including the classic Blast Radius: 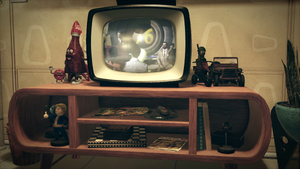 The television set has a few references. The most obvious are to Nuka-World, the Fallout 4 model spaceship and the statuettes. However, the most noticeable is the color television set, which is incredibly rare, our first look at a Fallout-style jeep and all-terrain bike, and a toy soldier identical to that MacCready has.

If you look on the lower shelves, you can also see another two issues of Scouts' Life and a fresh copy of the Backwoodsman, another new perk mag. 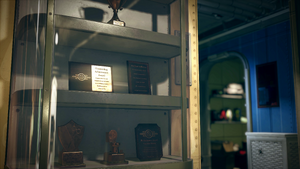 Ah yes, the awards for achievement in Vault life. Let us cover them from the lowest shelf to the top, left to right:

Is it us or was Vault 76 a little more morbid than usual for Vaults? 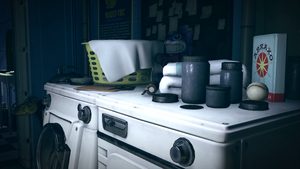 A shot of the washing machines with the usual Abraxo scouring powder, and what looks like a new - and as usually, creepy - cat mascot. If you look in the background, you can see Vault-Tec Procedures, which actually just quote fragments from letter from Vault-Tec:

Vault-Tec provides all clothing, bedding, and accommodations for residents. Personal belongings must be reviewed and approved of by an authorized Vault-Tec hermetics technician before such belongings can be delivered to your reserved quarters within the Vault.

All Vault residents must attend an orientation seminar. If you did not attend such a seminar as part of the application process, you must make an appointment with your Vault-Tec representative. 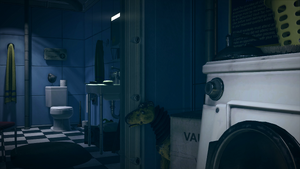 Well, hello there, Giddyup. Looks like the hermetics technician let you in! 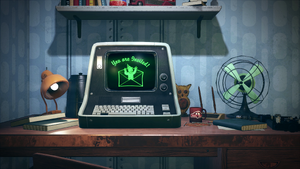 The standard terminal, invitation animation, and high quality props, including a military-grade circuit board, a Nuka-Cola Van, a Nuka-World cup... If you look at the pen holder, you can make out just enough lettering to identify it as an award to the Vault Dweller of the Year. 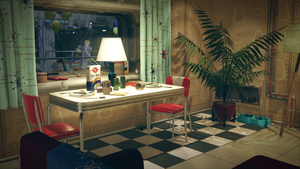 A breakfast abandoned in a hurry or leftovers? There's another Scouts' Life on the table, the classic Sugar Bombs, and even a dog bowl (we aren't even pointing out the Wonderglue or BlamCo Mac and Cheese in the background. However, we are wondering: Where are the people? 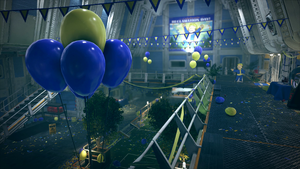 An atrium after the celebration of Reclamation Day. Now... Maybe everyone left already and our Dweller in the trailer is the last to go?

Or maybe they're just alone in the Vault since the explosions?