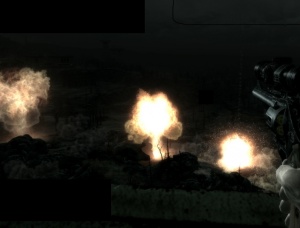 The satellite firing at night.

Highwater Trousers (Registration ID USDOD-21TXH)[1] is a Department of Defense[2] micro-nuclear weapons platform in geosynchronous orbit over the eastern seaboard of the United States. It is paired with a targeting platform which also controls movement of the satellite and aiming, but by 2077, the targeting component has deteriorated beyond use. As such, it remains locked onto the area near SatCom array NW-05a, ready to deliver its payload at moment's notice.[3][1] Highwater Trousers is not the only orbital nuclear weapons platform in existence, as military records indicate there were dozens, if not hundreds of them placed in orbit before the war.[4]

The player can activate the satellite using the Highwater Trousers' activation code found at SatCom array NW-05a. However, as the targeting platform is defunct, it will fire on a pre-determined area in the vicinity of the array.