Holography is a technique that allows for the creation and display of three dimensional images, both static and dynamic, as well as a variety of other, derivative implementations.

A once exotic technology, holography became one of the most influential technologies in the 21st century, becoming the de facto standard for data storage across the United States. By 2077, holographic data storage devices were ubiquitous, used for storing and transferring data, from entertainment to military information, with many more derivative technologies developed.

A THT tape, the revolutionary data storage technology that is the backbone of the IT sector of 21st century America.

The most important implementation was the Tape Holography Technology. Commonly abbreviated THT, it allowed for the manfuacture of high-density, laser-readable, manufactured-crystal storage devices capable of storing up to four terabytes of information in some models.[1] Small, durable, and incredibly convenient, these holodisks were the industry standard for storing data of all kinds, from transmissions to entertainment.[2]

Of course, holodisks would be useless without the appropriate medium to decode the inputs. These devices ranged from large scale THT entertainment tape players, capable of playing back movies in large scale and high resolutions,[3] the more compact Vault-Tec Industries Entertainotrons designed for Vault use,[4] to the small and portable Pip-Boy 2000 and Pip-Boy 3000 portable information processors, equipped with a holodisk reader.[5]

Hologram projectors that displayed three dimensional images using light waves were also developed, although these innovations saw extremely limited use. The only known holo projectors known to be used by the general public were integrated into the vending machines intended to serve the visitors to the Sierra Madre, which possessed a holographic interface that projected available goods.[6]

Holo projectors retained their popularity after the War erased human civilization. In one notable example, a salvaged holographic projector was used by the Children of the Cathedral to project an image of the Master in the main nave of the Cathedral during worship (passing it off as a supernatural manifestation to onlookers).[7] Of course, religion wasn't the only application. The Golden Globes film studio of New Reno was claimed by the Corsican Brothers around the 2240s, who used its holographic recording and projection suite to produce pornographic movies for distribution in the wastelands.[8] In another instance, on the opposing coast, Professor Calvert used a holographic projector to convince a Point Lookout tribe of his divinity and manipulate them into doing his bidding.[9] It is also reported that aliens utilize holographic technologies for their interfaces and communications.[10] 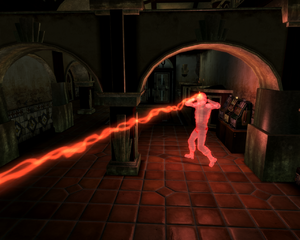 A militarized hologram with an EBE, engaging a threat.

The United States military also employed holographic technology, much like the civilian sector. Apart from holotapes, they also used holographic dog tags for easier identification of casualties, thanks to a much greater amount of information the tag could store.[11]

However, that was not enough. During the Sino-American War, research efforts were undertaken to weaponize holography, most notably at the Big MT research facility. Basing on RobCo Stealth Boy technology reverse engineered from captured Chinese stealth suits, the researchers attempted to create a design capable of matching the Chinese technological edge.[12] Despite promising initial results, holograms required excessive amounts of electricity to power, greatly limiting their potential.[13] Mobile holograms actually never reached any popularity in the United States.[14]

In fact, the entire program teetered on the brink of cancellation. However, the insistence of Frederick Sinclair, his vast wealth, and support from National Electric kept it going. The researchers at Big MT's Z-38 lightwave dynamics research facility developed the first working holograms, although their functionality was limited. They were only good as holographic greeters and walking cameras, unsuited for combat.[15] Contrary to their expectations, National Electric not only managed to weaponize holograms with their proprietary Emergency Broadcast Emitter (EBE) technology, but also commercialize it. However, they only managed to deliver their technology to one client: Frederick Sinclair and the Sierra Madre Casino. The EBE allowed holograms to attack identified threats with lethal force, while remaining practically invulnerable to retaliation.[16] Their only weak point were emitters, which could be destroyed despite their space age alloy housing or disabled if someone tampered with circuits.[17] However, if the emitters were safe, custom energy recycling emitters could keep them going indefinitely.[18]

No handheld hologram weapons were developed before the war. However, that didn't stop Elijah, a technological prodigy and Brotherhood of Steel renegade, from salvaging hologram emitters and producing crude, but devastatingly effective holorifles, using microfusion cells as a power source.[19][20][21][22]