Zion may not be lost to us, after all...

Honest Hearts is the second add-on for Fallout: New Vegas, developed by Obsidian Entertainment and published by Bethesda Softworks.

Like all add-ons, Honest Hearts is included in the Fallout: New Vegas Ultimate Edition, released on February 7, 2012 for all platforms.

Honest Hearts takes you on an expedition to the unspoiled wilderness of Utah's Zion National Park. Things go horribly wrong when your caravan is ambushed by a tribal raiding band. As you try to find a way back to the Mojave, you become embroiled in a war between tribes and a conflict between a New Canaanite missionary and the mysterious Burned Man. The decisions you make will determine the fate of Zion National Park itself.

Zion National Park is an expansive and diverse natural area filled with slot canyons cut by rivers and tributaries as well as numerous caves that dot the hillsides. As wild plants and animals (and a couple mutated ones, as well) thrive in the park, so too does the Courier with dozens of new crafting recipes, including new edibles, medicines and even new armors that can be created from searching the park for ingredients.

The following section is transcluded from Fallout: New Vegas achievements and trophies. To modify, please edit the source page.

Religion is a topic, I think, that often gets not a great treatment in video games. It was important for me for a long time to try and see religion portrayed (specifically, Christianity) in a realistic and interesting way in a setting. In Fallout I got a chance to do it with Honest Hearts. I'm not religious, I believe that there aren't any gods, but that doesn't really matter. The point is that the topic I thought was interesting, I thought it was worth exploring, and I had a fair amount of knowledge of Christianity from college, from studying it on my own, talking to people about it, debating the topic with people.

And then Mormonism. I learned a lot more about from studying its history and talking with Mormons to get a more in-depth understanding of it. Before I did Honest Hearts I went out into Zion and I read the Pearl of Great Price by Joseph Smith. It was all just to get a good understanding of it, just to present something that made some sense. I didn't get everything right and, you know, you can never get everything absolutely right (or it would be very hard to). The point is, you try to approach it seriously and take it seriously. And if you're going to break rules about something, you kind of have to know what these rules are before you can really break them in a way that's interesting or justifiable, otherwise you're just kind of making stuff up. Which, you know, you can make stuff up, but I think that if you try to deal with a real world subject, you should probably know something about it. 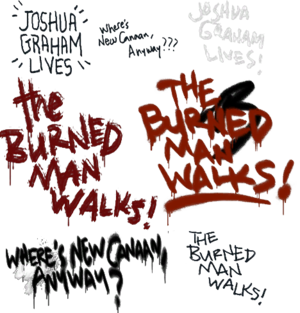 Dead Money had a deferred PS3/PC release, so yes. HH having the cycle it did relative to DM and (especially) OWB and LR was not engineered that way from the start. After HH finished testing, there were overall F:NV game stability issues that needed to be fixed via patch, which is why HH was pushed, and OWB and LR with it. When the push happened, HH was already out of testing, but work/testing on OWB and LR continued.