Hopeville is a town in the Divide in the Fallout: New Vegas add-on Lonesome Road.

An isolated town located on the California/Nevada border, Hopeville and its bigger brother, Ashton, were established in the late 21st century in the remote badlands to act both as an example of the American dream in practice and its guardians. Beneath white picket fences, cookouts, and children happily frolicking in the streets lay an extensive network of nuclear missile silos built under the auspices of the Commonwealth Defense Administration Ballistic Defense Division. Although omnipresent jingoistic propaganda declared this a solid ground for the American dream, it was anything but: The complex was established in a geologically unstable region, where minor earthquakes were quite common. Military authorities downplayed these problems, confident in the safety of American engineering.[1] Another problem was caused by the fact that the Army used Hopeville as proving grounds for Big MT's weather control research, using the denizens of the regions as guinea pigs.[2][3]

Although Hopeville was a planned community with carefully selected citizens, the system was not foolproof. By 2077, the region had a large community of dissidents, including local hippies, who protested the ongoing Sino-American War and the ravages of the military-industrial complex at military construction camps across both Hopeville and Ashton. In an example of "white-hot rage of capitalist justice," the Political Office arranged to have them rounded up and sent to Big MT as test subjects for the company's latest projects, aided by troops from the 11th Armored Cavalry Regiment under the command of General Wellesley, military liaison to Big MT.[4][5][6]

Although it was considered a vital part of America's ballistic shield, it appears that building the missile complex near fault lines was, in fact, a bad idea. During the Great War, the nuclear missiles stored in the missile silos were never launched, remaining safely in their berths for the next two centuries.[7] 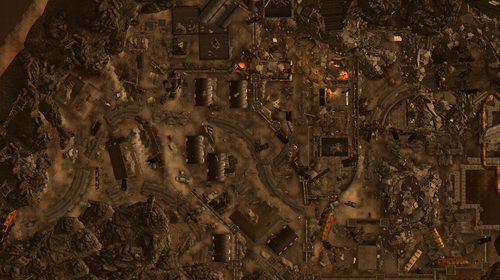 Overhead shot of the Divide.

Located in the southwestern corner of the Divide, Hopeville was home to both the missile base and its facilities, as well as a regular town housing civilians and providing services to soldiers stationed at the base. A highway passed by the edge of the base before heading out west, with another road passing through the base grounds and connecting to the High Road superhighway network. Interestingly, the Solitare gas station was part of the public road, cleaving the silo off from the base.

Located in the western part of Hopeville, the missile base was separated from the highway and the town by a combination of chain link fences and fortified walls. The entrance built into the western cliffs led to the Hopeville missile silo - one of several ringing the base - while the base grounds proper stretch between the fences and walls to the east. The road bisects the base into two halves, with the northern section housing the command center and one half of the barracks, while the southern one housed the loading station and armory, together with auxiliary buildings.

Hopeville proper was herded in by walls terrain features, and the superhighways, with buildings clustering together around the road passing through the town. Two main gates connected the town to the base. The northwestern corner contained the fire station and local corners and shops serving the personnel of the missile base, while the opposite end contained industrial and office buildings. Two centuries of neglect and the devastation unleashed by the Courier have left little trace of the civilian life, with the ruins serving as marked men outposts.