The Hub was a larger city than both Junktown and Shady Sands combined. You could drop the Vault in there, and you probably would not notice. But the people of the Hub had no life, and it was a desolate place just the same.

The Hub is a major trading city located in southern California.

The Hub is the primary trading center of New California, organizing caravans headed to Shady Sands, Junktown, Boneyard, Necropolis, and other communities in the region. Since 2162, its power expanded considerably. By 2281, it remains the largest trading center in the wastelands, fueled by the fact that people will trade for just about anything: chems, tires, guns, bullets, food, brahmin, scraps of metal, even dirt. The large community of traders, barterers, gamblers, and other interesting scum passing through ensures that there is always something interesting going on.[1]

The Hub was founded in 2093 by a man named Angus, who set up camp around a filthy oasis in the desert, located in the remains of and an old town left (relatively) untouched by the Great War, and proceeded to begin trading with other settlements.[2]

In 2096, a man called Harold rose to the level of a caravan boss in the Hub.[3] His caravans suffered occasional attacks in the wastes, but Harold's caravan outfit survived and prospered... until the mutant attacks begin to pick up a few years later. Increasing mutant attacks on Harold's caravans so infuriated Harold that, in May 2102, he financed an adventuring party to find out where the mutants were coming from. Consulting with a scientist and doctor at the Hub, a man by the name of Richard Grey, the two of them decide to join forces. They, along with two others, sought out the source of mutants that had been attacking civilians in the area. Their travels led them to the Mariposa Military Base, where, after stiff resistance from robots, everyone was separated, and both Richard Grey and Harold were exposed to the FEV vats. A few months later, Harold was found by traders and taken back to the Hub. But he wasn't human anymore - he was transforming into a strange ghoul-like mutant. His former caravan partners and employees, horrified by his condition, abandoned him without even two bottle caps to rub together. However, he soon became the leader of the Hub's small ghoul population.[4]

In 2120, Angus established himself as the governor of the growing Hub.[5] Five years later, in 2125 the raider tribe known as the Vipers attempted to raid the Hub, but despite having a numerical advantage, they were fended off by a coordinated defense led by Angus, and the defeated raiders retreated to the north. In the winter of the same year, however, Angus was suddenly murdered by an unknown assailant, leading to widespread chaos erupting in the Hub.[6] Angus' death led to the Great Merchant Wars in 2126, which started when a band of merchants seized the water tower in the Hub. They demanded anyone wanting water must pay a toll. The war lasted for two years. The Water Merchants sealed up the town, but were outnumbered. In 2128, Roy Greene (Justin Greene's grandfather) made peace and negotiated a settlement. The Hub's Central Council was formed, composed of two representatives from each of the Hub caravan companies. With six members, votes required at least four votes to pass. A long period of indecisiveness and meetings maintain the status quo in the Hub.[7][8]

Of course, the wars weren't the only problem. In 2131, the Master began ordering his super mutants to gather human stock from Hub caravans. For many years, the caravan disappearances were blamed on monsters in the desert, and even when the abductions begin to occur on Hub caravans, the blame was put on deathclaws and other groups. However, humans proved to be worse than monsters. The Hub Underground was formed by a man called Decker in 2140, who quickly started pulling the strings in the town.[9] In 2150, the newly reformed Vipers clashed with the Brotherhood of Steel.[6] The battles intensified in subsequent years, culminating in the death of High Elder Maxson II in 2155. John Maxson's father expected the raiders to break formation and flee when faced with Brotherhood warriors clad in powered armor, but did not account for their religious ferocity. A poisoned arrow nicked him when his helmet was off, and he died within hours.[10] The Brotherhood retaliated with an extermination campaign against the Vipers. The Paladins tracked down and wiped out almost all of their members within the span of a month. A handful of Vipers were able to flee north and east into the mountain range; While small groups continued to exist and raid in New California, they never regained their full power.[6]

The coming of 2162 and defeat of the Master only served to further establish the Hub as a major influence in the region. Despite initial misgivings about the alliance between Junktown and Shady Sands, the trading city eventually became a founding member of the New California Republic in 2189 and one of the key influences on its development.[12] In 2189 Hub became on of the five founding states within the NCR with representatives (or "governors")[13] from it having a major say in the affairs of the fledgling republic.[14]

Its influence grew further with the Brotherhood War. When the Republic's gold reserves were destroyed by Brotherhood raids to the point where new gold coins could not be minted and paper money could not be properly backed with gold. NCR citizens panicked and rushed to reclaim the listed face value of currency from NCR's remaining gold reserves. Since the NCR was unable to realize these withdrawals, particularly towards the frontier, faith in their currency considerably dropped. To protect against actual economic collapse, the NCR government abandoned the gold standard and established fiat currency, not payable in specie.[15] Since then many wastelanders lost faith in it as a medium of worth, both as a result of it not being backed by anything but the government's word and the inevitable inflation.[16] In response to the loss of faith, merchant consortiums of the Hub re-established their own currency, the veritable bottle cap, backing it with water (exchanging a standardized measure of water for caps).[17][18]

The Hub can be found one square east and thirteen squares south of Vault 13. 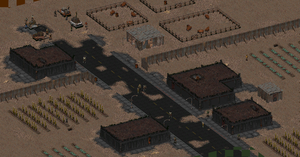 Welcome to the biggest traders city in the Wastes!
Main article: Hub entrance

Fundamentally, the entrance of the Hub serves as both a landing and a jumping-off point for the countless caravans that crisscross the wastes. At any time, several caravans will be loading or offloading goods, typically accompanied by a retinue of heavily-armed mercenary guards. Apart from the staging areas for the caravans, much of this outskirts area is given over to agriculture, under the protection of the Hub Police.

The busiest section of the Hub, downtown is second only to the entrance in terms of foot traffic, the entrance only busier due to caravans. Downtown is host to most of the city services, including the Hub Police station and library, as well as a number of commercial interests: both the Far Go Traders and Crimson Caravan hold offices in Downtown, as does the Friendly Lending Company and a few arms merchants. One colorful character in Downtown is Bob Frazier, proprietor of a lucrative iguana-on-a-stick stand. The Maltese Falcon, the local bar and flop house, rounds out the area. The occasional homeless or drifter, such as Irwin, can also often be found here. 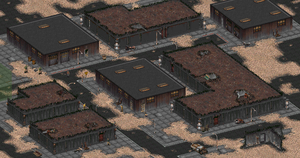 Have you ever danced with the devil in the pale moonlight?
Main article: Old Town

The enigmatic section of town, Old Town is a combination residential and commercial district. Several important characters, including Harold and Loxley can be found in Old Town, along with a handful of arms merchants and miscellaneous Hub residents. Despite its unassuming appearance, however, a great deal of danger can be found in Old Town by the adventurous or unwary, and several miscellaneous quests have their roots here. 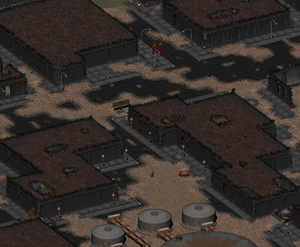 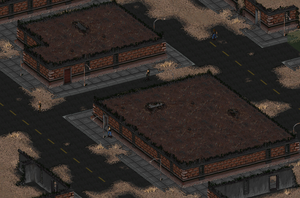 The Heights is the upper-class residential area of the Hub, and is home to Daren Hightower, a local and very wealthy merchant. That Hightower keeps considerable valuables in his mansion is an open secret, any merchant as rich as Hightower certainly has items of value worth taking. Hightower, however, has not made his money through foolish risk-taking, so the Heights are often patrolled by paid mercenary guards. Any visitors without a good reason - or at least a good story – for being in the area are promptly ushered out, usually at gunpoint. 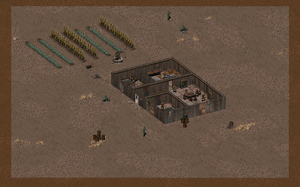 This location is only accessible during the quest "Help Irwin". It's a small farm, next to the Hub owned by Irwin, which was now under the control of a band composed of seven raiders. 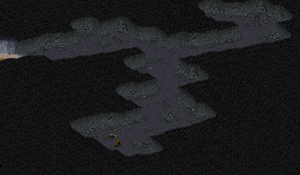 Find out about the deathclaw?
Main article: Deathclaw's Lair

This location is only accessible during the quest "Find the missing caravans." The deathclaw's lair is a cave near the Hub, and the home of one of the fearsome deathclaws and a dying super mutant.

Several factions constantly vie for control of The Hub:

As of the arrival of the Vault Dweller, the Underground is known to have been destroyed by him (with the help of the Hub Police or not), since the Hub is still here in both 2241 and 2281.

The Hub appears only in Fallout, and is mentioned in Fallout: New Vegas and Fallout 4.