The hunting revolver is a weapon in Fallout: New Vegas. 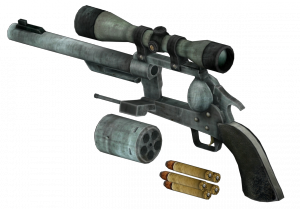 The hunting revolver is a large, double-action revolver that fires .45-70 Gov't ammunition. On the base on the hand grip, a generic serial number 05709234 is stamped into the metal. It does significantly more damage in comparison to the .44 magnum revolver and comes with a scope as standard, versus requiring a modification as with the .44 magnum. The hunting revolver scope also offers more powerful magnification at 2.46x, compared to the 1.86x magnification for the .44 magnum scope. Its high base damage is second only to the Ranger Sequoia when compared with other single-handed guns.

Despite being a one-handed revolver, the hunting revolver is not a holdout weapon, meaning that, even at a sneak skill of 100, it will not pass a search when entering a weapon-free location where you are asked to turn over your weapons.