You will receive a congratulatory message when you collect each one and, if you find all 10, General Chase will commend your intelligence-gathering ability and you will receive the Covert Ops perk as a reward.

You must find all the intel suitcases in the The Guns of Anchorage portion of the quest before continuing into the next part of the add-on or you will not be able to earn the reward perk. You cannot return to the Guns of Anchorage area once you leave it.

The Guns of Anchorage

1. Shortly after Sergeant Montgomery swings down from the ceiling and you head outside, you'll walk past a large steel pipe connecting the two mountains. Walk across the pipe and inside the bunker will be a locked door. Inside is the intel, underneath the desk. Inside the same room will also be a "Holotape - Bombardment." Montgomery will make a comment about crossing the pipe ("And here I thought I was the one with a death wish!"). If you hear Montgomery comment on how he never wants to see another catwalk again, then you've gone too far. The pipe is a short distance behind you.

2. After Montgomery's comment about how he never wants to see another catwalk again, you should come to a cable bridge. Cross that bridge, then the bridge after it, and you will come to a locked door in the cliff called door to field storage. Inside the room is the next piece of intel, along with "Holotape - Goodbye." Again, you'll know that you went too far because Montgomery will make a comment about the objective ahead. The door should be behind you.

3. After entering the artillery outpost, climb the set of stairs in front of you. There should be a guard climbing the stairs when you enter the outpost. You'll enter a room with a Chinese assault rifle on a box behind the overturned table. Head east into the hallway, and after you turn the corner there will be a door to your left (west, as you turn the corner). It's very difficult to see if you're moving quickly. Inside is the next piece of intel, along with "Holotape - Invasion" and a Stealth Boy on the large crate. When you hear Montgomery comment about the Chimera tanks, you have gone too far. Turn around and head south. The hallway will be on your right (west), and the door should be right before you get to the bend.

4. When Montgomery makes his comment about the Chimera tanks, you'll be on a 'cliff' with the drop to your right (east). You'll soon enter into a room with a door on the west side. There is a terminal next to the door, and a table next to the terminal with various goodies. The intel is sitting on the desk in the room behind this door. If you reach the stairs, you've gone too far. The door is directly behind you.

Once you have eliminated all three guns, you will be taken to the military base and told to prepare a strike team for a "suicide mission." You have the ability to choose which of the objectives you go for first, but this is a suggested order. If you do choose to go for a different objective first, simply scroll down and find the intel for that objective.

5. The next piece of intel is in the mining town on the way to the listening post (which is one of the three main objectives). You may want to bring snipers for this one. Head out of the camp and take a right. After you cross the train tracks you will see a stack of metal containers to your left (with a sniper on top), and to the right you will see a sandbag wall and a bombed out building along the small cliff. Watch out for the Chinese launcher inside. The intel is in the northwest corner of the building on top of some wooden crates. If you make it to the crates with the ammunition and health you have gone the wrong way. Simply turn around and face the door you came in and you should see it.

6. Fight your way through the gauntlet until you come to the Listening Post. Go through the first room, fight your way past the guards in the second room and then the tunnel. You will come to a room with a set of metal stairs going up. Beneath the metal stairs is a shelf with the intel sitting on it. If you climb the stairs, you should see three fans in the south wall, and you have gone a tad too far. Climb back down the stairs and look beneath them. 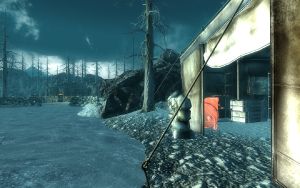 Intel is in the far tent

7. On your way to the Chimera Depot (Main Objective), you and your strike team will have to assault an Ice Camp, the Chinese Forward Camp Delta on your world map. Move into the camp, clearing all hostiles. As you enter the compound there will be three tents, a west (left), north (straight ahead), and a east (right) tent. Go through the west tent (the one with the health and ammunition) and look north and you will be able to see another tent off in the distance. Inside that tent will be the intel, which is on top of the table adjacent to the crate.

9. On the way to the Pulse Field, you want to take the middle path right into the bombardment. Follow the path (the game basically forces you to follow this path so you really can't miss it) and you will come to a trench that is manned by American soldiers. Move through that trench until you come to the next section, this one filled with hostiles. Right after you enter the trench you should come to a wooden shack, inside there is health. In the corner is a captured, crouched, American, he is sitting in front of the intel.