The so-called Jefferson Engine (the name had not been decided) was an isometric 3D game engine which was to be used for Van Buren, Black Isle's cancelled Fallout 3 project. It was said to produce a look similar to that of Infinity Engine games.

The following is just an excerpt from the FAQ topic listed under Sources below. 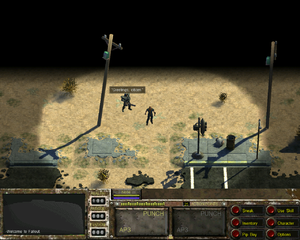 At the beginning of the van Buren tech demo

The engine used an isometric viewing angle and would allow a resolution of up to 1600x1200x32, volumetric shadows, and dynamic per-pixel lighting. The creature/character avatars in Jefferson were all around 1000 polys. The PC models had 180 animations.

The camera was locked at an angle; moving the mouse to the edges of the screen resulted in panning. Right and left arrow rotated the camera around its focus on the terrain by 45 degrees. Up and down arrow went to directly overhead and back down to 38.5 degrees.

The maps in Jefferson used pre-burned light and shadow maps, which merged with the pieces of static geometry during the rendering process. On the other hand, there would likely have been dynamic lights as well as shadows for dynamic objects. 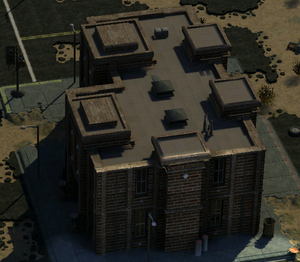 A building in the tech demo

The engine used separate maps, not a continual world like Morrowind, Gothic or Dungeon Siege. Buildings with several levels had individual maps for each level.

The environment was more interactive than in the Infinity Engine games, but nowhere near the level of Ultima VI.

There was not supposed to be a fog of war, but a "dim haze of war", i.e. areas slightly dimmed where your character does not have line/extent of sight. The haze of war would hide non-player characters but nothing else.