Johnny is a character in the Mojave Wasteland of 2281.

Johnny is found dead on the cliffside overlooking Goodsprings source provided the Courier has the Wild Wasteland trait. If not, the corpse of a Prospector appears there.

His corpse may not be present atop the ridge if you approach Barton Thorn before finishing Sunny's tutorial quests. 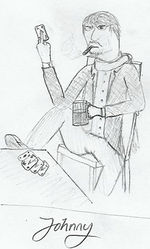 Johnny is a nod to the character Johnny "Five Aces" from The Zybourne Clock, an abandoned game project proposed and mocked incessantly by members of the Something Awful forums. His appearance in Fallout: New Vegas is based on the original concept sketch of the character, as well as some of the concept storyline. The following is a quote the main developer of Zybourne Clock used to describe the project:

When the object enters the timestream, time begins to correct itself. Let me use this example: Imagine four balls on the edge of a cliff. Say a direct copy of the ball nearest the cliff is sent to the back of the line of balls and takes the place of the first ball. The formerly first ball becomes the second, the second becomes the third, and the fourth falls off the cliff.

Hence the balls found on top of the ridge where Johnny is.