Klamath is a town built upon the remains of Klamath Falls, located in southern Oregon. Klamath can be found four squares east of Arroyo.

It is a small community of trappers that hunt the giant, mutant lizards called geckos in the area. Highly prized for their pelts, especially those of the golden geckos, they are the lifeblood of this community. Klamath is the stopping point for caravans on their way to the tiny tribal villages to the north, like Arroyo, and also serves as a place where members of those tribes can come and exchange information, goods, and news about the larger world.

A few months prior to the Chosen One coming to Klamath in 2241, the locals believing the mechainical screeching of the Mister Handy to be a spirit.[1][2][3][4][5][6][7][8][9] an Enclave Vertibird crashed in the nearby canyon due to a rotor malfunction.[10] A prop blade of which eventually was scavenged by Lily Bowen to make her sword[11]

As of 2241 the city was plagued by rats. Vic the trader, who lives in Klamath, has been captured by Metzger and needs to be rescued. The Chosen One visited Klamath and made the town a little more exciting for some time. Forty years on, it's still the same good old Klamath where one can hunt, eat, and skin geckos for pelts all day long.[12]

Klamath is divided into four districts, one cave section and one outside section. 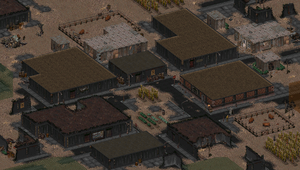 Downtown is the eastern part of Klamath. It is a mix of agricultural, residential and commercial uses. Plenty of Klamath's citizens can be found wandering around or visiting the two pubs. Aldo will be ready to greet you when you arrive here. 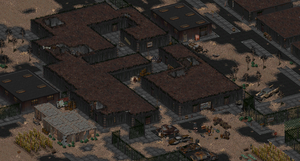 Rats can be a real nuisance
Main article: Trapper Town

Trapper Town is the western part of Klamath, where the gecko trappers reside. Slim Picket is the top dog in this town, although doesn't really have much to say, other than asking your help with a vermin problem. Underneath the Trapper Town stretch the infamous Rat Caves.

A Vertibird has burrowed its way into the dirt here. Its pilots are dead, and an evil spirit haunts the area. What the Chosen One believes is an evil spirit is actually just a malfunctioning Mister Handy. 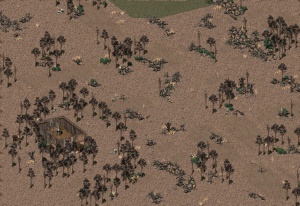 One moonshine and many geckos
Main article: Trapping Grounds

This area is found on the lower right of the entrance of Klamath. This is where "Whiskey" Bob's moonshine is, and the habitual hunting ground for gecko trappers, populated with a large number of golden and normal geckos. 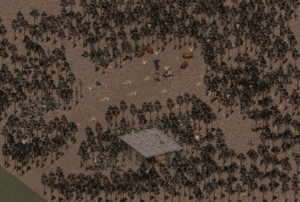 The Grazing Grounds is a place next Klamath, where Torr's brahmin usually graze.

Klamath appears in Fallout 2. However, while not appearing in-game, Klamath is also mentioned by Klamath Bob, Daisy Whitman and Lily Bowen in Fallout: New Vegas