Kokoweef Mine is one of the gold mines in Redding. Ran by Marge LeBarge, the owner aligns it with the New California Republic. In competition with Morningstar Mine, LeBarge wants to control the gold mining in the town. However, the combination of Jet addiction among miners, a broken down excavator for control of the gold exports in Redding, though since the excavator is broken, all McGrew can do it stare at LeBarge and coax his miners to work harder - something that became hard with the Jet from New Reno. 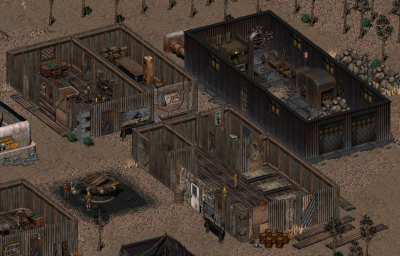 The mining camp consists of an office, miner barracks, with the elevator to the mine itself located behind the barracks building.

Kokoweef Mine appears only in Fallout 2.