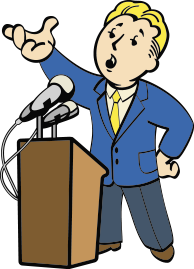 Language in the Fallout series consists of a combination of pre-War languages from across the world to new post-War dialects and languages that could be considered their own.

Note: Not all foreign language phrases have perfect translations, and the translation given may have other variants or possible meanings.

The official language of the People's Republic of China, Chinese or Mandarin unsurprisingly not appear often in the post-War world. It is spoken by the Shi of San Francisco, and small fragments of Chinese are also spoken by the moored submarine pilot Zao in the Boston harbor.

The English language, arising first in medieval England and eventually becoming a lingua franca, is the prevailing language in post-War America. It is the standard for business and daily life throughout the wasteland.

A near-rare language to come across in the post-War world, French is still utilized by some.