The Last Gasp Saloon is a combination saloon and funeral parlour in the Mining Camp district of Redding and is run by Josh Laurence.

Josh Laurence couldn't make ends meet with his mortuary profession, so he decided to make his Funeral Parlor into a theme bar.[1] 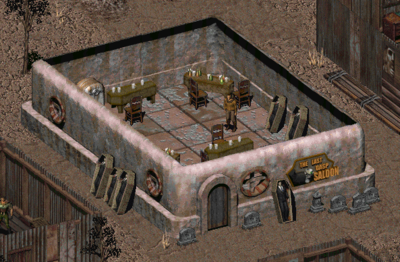 The establishment is made up of only one room, with closed coffins acting as tables and open coffins leaning up against the walls, both inside and outside. Not all of the bodies that can be seen in the open coffins are real. In addition, several tombstones are at the front of the building.

The name is a combination of Last Chance Saloon and the phrase 'last gasp' which refers to the interrupted breathing pattern of someone who is close to death.