This is your road; when you come, you'll walk it alone.

Lonesome Road is the fourth and final story add-on for Fallout: New Vegas, developed by Obsidian Entertainment and published by Bethesda Softworks.

Originally scheduled for release in July 2011,[1] Lonesome Road was delayed and subsequently announced for an August release.[2] It was later announced that the add-on had been delayed a second time.[3] It was finally released simultaneously on September 20, 2011 for Xbox Live, PC and PlayStation Store.[4] It costs $9.99.

Like all add-ons, Lonesome Road is included in the Fallout: New Vegas Ultimate Edition, released on February 7, 2012 for all platforms.

Lonesome Road brings the Courier's story full circle when you are contacted by the original "courier six", a man by the name of Ulysses who refused to deliver the Platinum chip which resulted in the robbery and attempted murder of the Courier outside Goodsprings. In his transmission, Ulysses promises the answer as to why, but only if you take one last job - a job that leads you into the depths of the Divide, a landscape torn apart by frequent earthquakes and violent storms. This is the fabled location of the battle between the Courier and Ulysses.[5] The road to the Divide is a long and treacherous one, and of the few to ever walk the road, none have ever returned.

The following section is transcluded from Fallout: New Vegas achievements and trophies. To modify, please edit the source page. 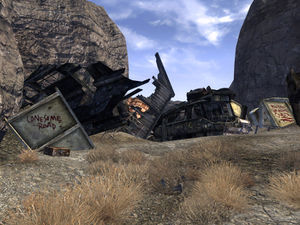