Lost Hills is the codename of a security bunker located in the south-eastern end of the Central Valley in California. Claimed by renegade soldiers under Captain Roger Maxson in 2077, it is the headquarters of the Brotherhood of Steel, located four squares west and eight squares south of Vault 13.

In November 2077, a few weeks after the Mariposa Rebellion and the Exodus from the military base, the refugees from the base arrived at the Lost Hills government security bunker. The people suffered casualties along the way, as while the soldiers enjoyed the protection afforded by their T-51 power armor, their families had naught. Marauders that attacked the caravan on its journey quickly learned to target the unprotected civilians. Although for every lost civilian two raiders fell, many lives were lost, including Roger Maxson's wife (but not his teenage son).[1][2] Several soldiers broke off during the Exodus as well.[3] A faction led by Sergeant Dennis Allen gained strength, demanding the leadership to allow them to explore the ruins of the West Tek Research Facility for advanced technologies left behind. Ignoring warnings from Captain Maxson and defying the group's will, Allen's faction separated from the main caravan and ventured southeast to the Glow, taking their power armor with them. They were never heard from again.[4] Around 2151, the Brotherhood sent out Knights to seek out Allen's group or its remains. All they found were desolate ruins.[3]

The Exodus survivors claimed the bunker as their own. Lost Hills became the headquarters of the newly formed Brotherhood of Steel. The refugees expanded and adapted it to fit their own needs, becoming a bastion of technology in a world that has lost centuries of technological development overnight.[5] Lost Hills became the primary supplier of weapons and ammunition to the region, until the emergence of Gun Runners and other rival manufacturing houses. They traded ordnance for food, water, and necessary supplies, not bothering with manufacturing them within the bunker.[6]

Following the destruction of the Unity circa 2162, the Brotherhood aided other human settlements to drive the mutants away with minimal loss of life on both sides of the conflict. The Brotherhood remained out of the power structure for a time, becoming a major research and development house and reintroducing advanced technology into New California at a slow pace. The wise guidance of Rhombus brought the Brotherhood to arguably the zenith of its power.[7] The Brotherhood had good relations with the developing New California Republic, to the point that one of the states of the federation was named after the founder of the Brotherhood: Maxson. However, Lost Hills was never incorporated into the NCR, although Brotherhood patrols did provide protection for the state.[8] 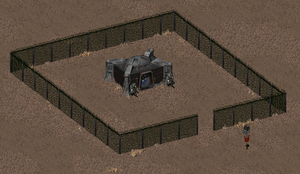 On the surface, the installation is almost unnoticeable. The only thing rising above it is a small bunker housing the elevator leading below ground. A pair of Brotherhood guards is stationed in front of the bunker, to process visitors and clear entrants into the bunker. Menacing patrols of Brotherhood Paladins constantly scour the area surrounding the bunker, to intercept hostile incursions and bring suspicious characters to Lost Hills for questioning.

Cabbot, a Scribe Initiate, handles travelers. When spoken to, he initiates the quest; Become an Initiate. 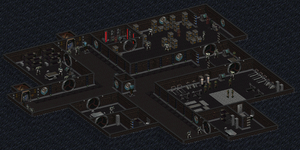 The first underground level is built on the plan of a cross, dividing it into quadrants. The northwestern quadrant houses the guardroom, where Paladin patrols rest (off limits to other members). The southwestern quadrant is the office and quarters of Rhombus, Head Paladin and Master Knight.

The southeastern quadrant houses the training chamber where Initiates are schooled in the art of war, overseen by Senior Paladin Talus and Knight Thomas. Opposite the training chamber is the storeroom, where the Brotherhood's impressive stockpile of technology is located. In the corridor between these two is the office of Michael, the quartermaster.

There are plenty of things to do on this level; 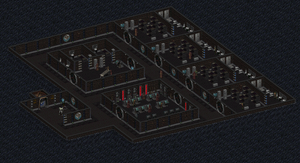 The second underground level houses the facility's medical center, offering top notch treatment nearly unparalleled treatment across the wasteland. Basic medical procedures (removing radiation, poisons, treating injuries) are free, while advanced surgeries are offered for free only to working Brotherhood members in good standing. Outsiders inducted into the Brotherhood have to pay. The aforementioned surgeries are available to the player at the following prices:

Apart from the hospital, this level also features the Initiates' living quarters and classroom. Initiates have one duty: To study diligently to become a Knight or Scribe. Their quarters are spartan, with twelve Initiates sharing a single room and the adjoining hygiene facilities. 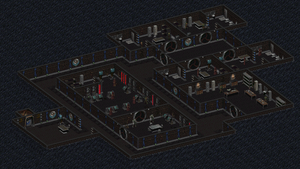 The third level of the Lost Hills security bunker is the source of the Brotherhood's power. It houses its primary library and laboratory, used by Scribes to research ancient technologies,[9] and the workshops where the Knights put them to practice. Both castes have their quarters on this level and enjoy considerably more space than the Initiates: While each room has similar amenities, they only house three Knights or Scribes at most.

Master Scribe Vree and her assistant, Sophia, can be found in the library. Knights Paul and Kyle are in the workshop, diligently working on technologies recovered by the Scribes.

As expected, the player can do quite a bit here: 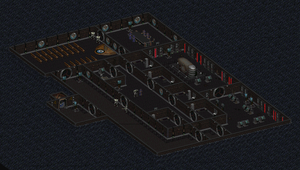 The deepest level of the security bunker houses its nervous system. It hosts the main auditorium, the council room where the Elders congregate to decide the course of the Brotherhood (often resulting in a lack thereof), with their quarters located in the central section of the level. The mainframe of the security bunker lies in the extreme eastern end of the facility, housing the entirety of the Brotherhood's knowledge.

The player can accomplish a number of things:

All inhabitants of the bunker are members of the Brotherhood. Outsiders may be allowed to enter the bunker under escort. They are typically traders, but Ismarc, a talented singer, is known to have performed for Brotherhood members at Lost Hills.

As a military order, discipline is enforced and all brothers (male or female) are assigned duties for the betterment of the Brotherhood as a whole. However, unlike military orders of old, all members are free to pursue friendships and romance, as long as they continue to fulfill their duties.

The different castes can be easily identified by their equipment:

Lost Hills appears only in Fallout and is mentioned in Fallout 3, in the Citadel terminal entries and by one of the Paladins during the Galaxy News Radio quest, after the player defeats the super mutant behemoth and Fallout 76.