The Lucky 38 presidential suite is an unlockable player housing located on the 22nd floor[1] of the Lucky 38 casino. Additions can be bought from a terminal in the suite. Aside from player housing, the suite acts as a club house for your followers. All followers can be told to wait here, giving you a single location in which you can compose your active party. When in the clubhouse, companions will wander around, sit down, drink beverages, eat food, and sometimes interact with each other.

The presidential suite features a master bedroom, a guest room, a kitchen, a bathroom, and a recreation room.

The master bedroom contains an owned bed, and a desk with an unusable terminal on it. The player may purchase two master wardrobes and two weapon trunks for this room. 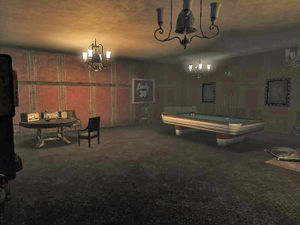 The recreational room houses a pool table, a T.V., and the snow globe stand. The player may purchase a Sunset Sarsaparilla vending machine for this room. 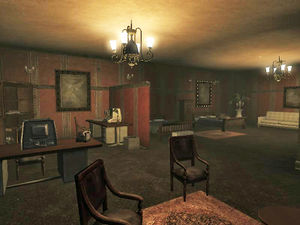 The guest room is a fairly large room ideal for followers to stay in. It has two beds, one footlocker, two wardrobes and furniture items inside it. The player may purchase the guest wardrobe 1 and guest wardrobe 2 upgrades for this room. It contains two smaller-sized Nuka-Colas on the table in front of the entrance. The bed on the left tends to be Boone's bed as he can often be seen sleeping there at night, with Cass sleeping next to him. The other bed belongs to Arcade, Veronica tends to sleep in your bed. 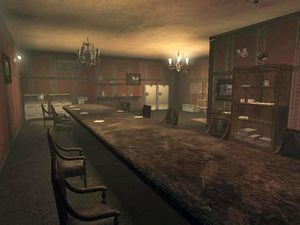 The kitchen is a room that contains a long table, two ovens and a refrigerator in which the player can store food. Additionally the player may purchase a workbench, 2 work bench lockers and a second refrigerator. 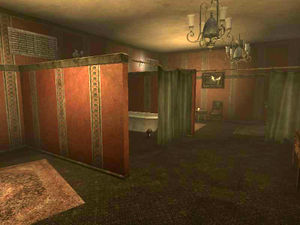 The bathroom is a large area to the left of the master bedroom that contains a few toilets and bathtubs. No upgrades can be purchased for this room, but players may find it useful to drink from the faucets and toilets. You will also find a small desk in here, to store and organize even more items.