This mailbox is a unique container in Fallout 3.

The more common term mail dropbox, also colloquially known as a post box, refers to the blue, metal boxes, standing on four raised legs in many present-day and abandoned settlements all over the Wasteland. They belonged to the pre-War Post Office Department and were typically used to collect outgoing mail from the inhabitants of said settlements. Although rusted nowadays, the emblem of the Post Office Department is still recognizable.

After the Great War and the nuclear fire, and since the former federal agency for postal affairs doesn't exist anymore, they seem to be used as garbage cans by some Wastelanders, and one can sometimes find some minor loot in them, in rare cases even weapons.

This variant however differs from the standard model in terms of naming and content. Though named the same, it has not to be confused with the mailbox. 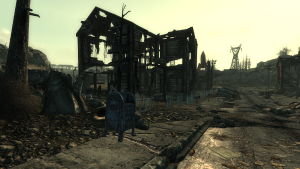 It can be found in Springvale to the left of the street when entering from Vault 101, just before the first houses, or more precisely their ruins.