Maize is a cereal grain that appears in various forms throughout the Fallout series. 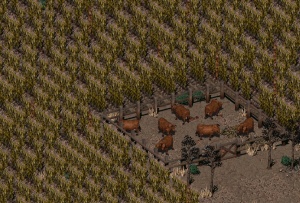 A vast field of mutated cornstalks in northern California.

Maize, also called corn, is a cereal grain first domesticated by indigenous peoples in southern Mexico about 10 000 years ago. The hardy plant grows into a tall, leafy stalk, which produces both pollen and fruit. The maize fruit is called a corn kernel, and grows in rows inside ears produced by the stalk. As a water-efficient crop that produces highly nutritious fruit that can be processed into food, ethanol, livestock feed, oil, and more, maize has become a stable of wasteland agriculture in both regular and mutated varieties.[1]

For example, New California, with its hot, arid climate, relies on the cultivation of vast fields of maize capable of thriving in the post-nuclear soil. In fact, the economic might of places like the Hub was built upon the tilled fields full of maize stalks, processed into countless process necessary for the post-nuclear civilization to thrive.[2]

A regular type of maize.