The Malamute Saloon is the primary watering hole of Redding. 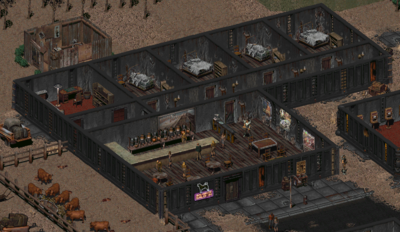 The main area of the Saloon is the bar, where Louise sells drinks and handles the customers. The bar is decorated with a salvaged billboard advertising Vaults, with the numerous brewing machines and stills neatly arranged in front of it. Though the miners often trade insults, the bar is surprisingly well kept. Guess they don't break chairs on each other all that often.

In the back there are rooms Lou rents, both empty and full. There's a manhole in her own chambers that leads below the city, into the tunnels.

Malamute Saloon appears only in Fallout 2.