Mariposa super mutants are super mutants created by exposure to the Forced Evolutionary Virus II from the vats of the Mariposa Military Base in California. They represent the finest form of super mutants, far more advanced than their primitive East Coast cousins created by imperfect strains of the virus.[1]

The following section is transcluded from Forced Evolutionary Virus. To modify, please edit the source page. 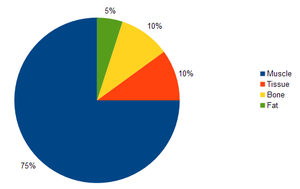 In humans, phenotypical changes brought upon by the Mariposa strain are substantial, accomplished by recursive growth patterns integrated in FEV. In order for the mutation to succeed, the subject needs to have a low level of radiation-induced damage[1] and should not have been exposed to the mutated FEV in the wasteland.[2][3] Subjects that do not meet these criteria will suffer a massive overhaul of the body's systems, leading to organ failure and an extremely painful death.[1][4]

The average super mutant is 3.2 meters tall and weighs in excess of 350 kilograms. Muscle accounts for over 75% of body mass, while bone and tissue are 10% each. Fat mass is exceedingly low, accounting for between 3-5% of body mass.[5] The increased muscle and body mass lead to a change in posture: FEV super mutants have a characteristic, hunched stance. The skin tone changes substantially and becomes gray with tints of light green, though as the mutant ages, it may become more green or even olive. The skin becomes much thicker and resistant to trauma, including cuts, bruises and damage from fire, acid or even gunfire.[5] Despite this resistance to trauma, completely destroyed tissues cannot be regrown, and will result in permanent scarring or organ loss.[6]

These changes are uniform across mutants, due to the aforementioned growth patterns and pre-programmed DNA loaded into the virus. This also has the effect of removing secondary sexual statistics, in favor of a pre-programmed masculine body shape. Primary sexual characteristics, such as the penis and testicles in males and the uterus and ovaries in females are unaffected.[7] However, super mutants are sterile, as FEV perceives gametes as damaged DNA and corrects them, resulting in sterility.[5][1]

Increased size of neural transmitters and synaptic receivers in the body give super mutants acute reflexes and heightened senses.[5] However, these changes are usually not accompanied by a similar rise in intellect. The FEV strain in Mariposa has a chance of modifying intelligence: while most people retain their pre-dipping intellect,[8] a majority of the remaining group experiences a loss (typically by 30%),[5] while the remaining minority of exceptional individuals may even experience an increase.[8] The loss is the result of damage caused by recursive growth and increase in brain mass, which may be accompanied by disfigurement and damage to existing neural patterns, causing loss of memory.[1]

The most stunning effect is practical immortality. Although theorized to only bring an approximate 10% increase in life expectancy,[5] the FEV strain in Mariposa results in a cell regeneration rate that exceeds cell death rate and prevents DNA degeneration through aging. The Hayflick limit is believed to have been completely overcome. This allows a super mutant to live for centuries, though if care is not given to exercising one's intellect, elder mutants may suffer from onset of dementia and Alzheimer's disease.[9] Death is made even more unlikely by the fact that super mutants are immune to common diseases[10] and radiation.[11]

The first step to create super mutants took place with West Tek batch 11-111, used to infect 15 chimpanzees. Growth and immunity levels were unprecedented: attempts to induce cancers through radiological and chemical agents were not successful. Increased aggression led to isolating the subjects by the science team, while violent epileptic seizures caused two subjects to expire. The rest was terminated after all data was mined successfully.[12]

Despite protests from the science team, on January 7, 2077, FEV research was transferred to the Mariposa Military Base,[12] to continue under the lead of Leon VonFelden and Robert Anderson. Batch 11-111 has been chosen as basis for further development and human experimentation, with a near 100% success rate on lab animals, granting an approximately 60% increase in size and potential 200% intelligence increase.[13]

A separate research effort was set up by Vault-Tec Industries in Washington, D.C. Vault 87 was established as an independent research center for Dr. Wayne Merrick, cooperating with the team at Mariposa. Despite his efforts, he was unable to improve batch 11-111 enough to reach satisfactory effects. Humans subject to his strains produced in the Vault 87 labs exhibited superior physical developments, such as increased size, strength and endurance to environmental factors, but were also characterized by significant mental retardation and extreme aggression to non-mutants.[14]

By comparison, the science team at Mariposa reached a full success, creating the FEV-II strain, able to create powerful super soldiers, exhibiting superior physical prowess, resistance to combat damage, aging and disease, as well as negligible loss of intelligence.[5] In certain cases, intelligence could even be increased by the virus. However, before the testing could begin in full, soldiers under the command of Roger Maxson rebelled and executed the science staff. With the Great War destroying the United States, Mariposa and research within was sealed by the soldiers and abandoned.[15]

The vats were rediscovered in 2102 by an expedition led by Harold, a major Hub merchant. Accompanied by Richard Grey, a brilliant exile from Vault City, he managed to crack the base security and infiltrate the lower levels. However, within the vats, the automated crane crashed into the two, knocking Harold out and flinging Grey into the vat with FEV. Harold woke up in the wastes outside the base, mutating due to exposure to FEV fumes, but becoming a special type of a ghoul-like mutant, rather than a super mutant. Grey, on the other hand, underwent extreme mutation due to prolonged exposure to the virus in the vat. His intellect grew exponentially, allowing him to comprehend even the most complex issues easily (or so he thought).[16] Grey methodically researched FEV, experimenting with animals and eventually, captured scavengers that strayed into the facility. It wasn't until a few failed mutations that he discovered radiation count to be a deciding factor in the success of the change, leading him to pick subjects more carefully.[16]

When his Lieutenant was created, he suggested a secondary reason for possible incompatibility. Reviewing available evidence, he concluded that failed mutations in relatively non-radiated humans are caused by the inoculating effect of a mutated FEV released during the destruction of the Great War had on humans it came into contact with. Such exposure was not enough to cause phenotypical changes, but enough to cause conflicts when the pure FEV in Mariposa attempted to change the DNA, resulting in the death of the subject. Grey (now calling himself the Master) concluded that prime subjects can be found among Vault populations. Super mutants were sent to uncover sealed Vaults and capture their inhabitants for processing. This move gave the Master unprecedented amounts of human subjects and in 2137 he began to mass produce mutants. The success rate was only 8-10%, but the Unity steadily grew.[17]

The number of test subjects was further increased by raids on Hub caravans and the establishment of the Children of the Cathedral in 2156. Captive caravan drivers and zealots underwent processing, both in Mariposa and Grey's seat of power beneath the Cathedral. In his lair, the Master and his staff experimented with FEV by injecting it into the brains of the subjects (usually the pineal gland, but also the amygdalae or medulla), triggering changes in brain chemistry. These experiments have limited success: four extremely powerful psykers were created, capable of theoretically wiping out the human race.[18][19] However, the usual effect included the creation of zombie-like mutants like Dane. FEV experimentation by the Master was abruptly halted in 2162, when he was killed by the Vault Dweller and the vats were destroyed.

After the Fall of the Master 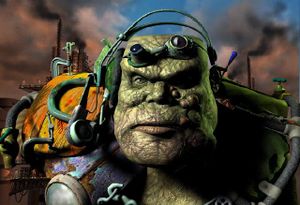 The destruction of the Unity and the Master caused the super mutant community to splinter and break apart. Bands of super mutants fled into the wastes in all directions, with charismatic mutants becoming leaders of warbands and even entire armies. The bulk of the super mutants led a disorganized flight northwards, into Oregon.[20]

An army under Gammorin fled east, towards the Midwest, to carve out a place for themselves in the desolate wastelands. Eventually, they were united into a single fighting force by Paladin Latham, an Eastern Brotherhood commander thought lost. Defeated by the Brotherhood in 2196, they ended up integrating into the Brotherhood as its shock troops.[21]

Another group, led by Attis, attempted to rebuild Unity using the secret Vault as powerbase. Around 2208, they were wiped out.

Some super mutants remained in New California, attempting to integrate themselves. Though the Brotherhood of Steel worked to drive them away, some managed to stay behind and become productive members of society. The most successful attempt was led by Marcus, who founded the community of Broken Hills as a model for cooperation between humans and human-based mutants.[22] Likewise, the New California Republic eventually adopted laws enshrining tolerance and deeming hate crimes based on mutation a criminal offense (around 2202) and allowed for mutants to apply for citizenship.[23] Some even ended up serving in the Republic's elite special forces, the NCR Rangers.[24]

The situation became more complicated with the emergence of the Enclave. Their excavation of the Mariposa Military Base in 2236 resulted in the creation of second generation super mutants from slaves used to unearth the ruins of the base. Though they were inferior to their first generation brethren, due to uncontrolled exposure to the virus, they were strong enough to destroy the Enclave troops left as a mop up operation. The Enclave sealed them inside the base by collapsing the entrance, but the damage was done. Eventually, the second generation mutants made their way outside the base.[25] Together with the die hard remnants of Unity plaguing the wastelands of northern California, they would remain an issue for years to come, affecting public perception of mutants. Less capable mutants, if captured, would face torture and mutilation at the hands of soldiers.[26] Some politicians even began campaigning on an anti-mutant platform to gain votes with the more bigoted strata of Republican society.[27][28] 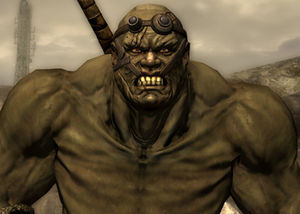 As such, many super mutants migrated eastward. Marcus led the group once again, after Broken Hills perished when the uranium ran out. He founded a settlement at Black Mountain in 2277, using the radiation at the site as a natural deterrent to humans.[29] However, a rift gradually developed between him and Tabitha, a nightkin officer from Unity. When Rhonda, her robot companion broke down, her mental condition deteriorated.[30][31] She gradually began to ignore his leadership.[32] In 2279, things came to an end. With no prospects for cooperation and clashes between nightkin and first generation mutants becoming more and more commonplace, Marcus left Black Mountain to establish Jacobstown.[33][34]

The two settlements became the primary concentrations of super mutant population in the Mojave by 2281. Jacobstown became a haven for first generation super mutants with a significant nightkin population led by Davison and Keene, enticed by the research and development efforts of Dr Henry, working on a cure for nightkin mental illnesses caused by their Stealth Boy use. Black Mountain became the center of State of Utobitha, a figment of Tabitha's deranged imagination and home to a very hostile group of nightkin and second generation super mutants.[35] The nightkin harassed travelers and merchants on the I-15 for supplies and food. Although the victims reported the matter to the NCR Rangers, they were unable to divert men and resources to take care of the problem.[36] Another problem emerged when Davison's group of nightkin left Jacobstown and attacked the Bright Brotherhood in their desperate quest to find Stealth Boys.