This is part 1 of the Maxson Bunker design document for Van Buren, the cancelled Fallout 3 by Black Isle Studios.

We're losing the war, we're losing technology to the wastes, and our inept commander can't do a damn thing about it! Well, some of us have taken steps to recoup our losses!

”— Devon Hill, the Circle of Steel.

Maxson Bunker was a pre-war fallout shelter built by a senator for his family and himself. Unfortunately, the war caught him unawares and the bunker was never used. All but forgotten, the bunker location was passed down as a family secret from one generation to the next. Eventually a family member passed the secret on to Roger Maxson, who claimed it for the Brotherhood of Steel.

The bunker was intended to be used as a staging area for exploration teams scouting the east. However, once the war broke out with the New California Republic the bunker became a forward base of operations against Hoover Dam, an NCR outpost. The war effort has gone poorly for both sides. The BOS has superior technology, but the NCR has superior numbers of troops. As a result, the war has been at a stalemate for years. Morale on both sides has plummeted but the BOS has been severely affected.

The BOS has always believed themselves to be an elite organization comprised of the best that mankind has to offer in soldiers and technology. The fact that a large group of under trained and under equipped troops could hold their own against such superior forces was an eye opener for the BOS. The war, in their eyes, has now become a senseless waste of lives and resources. Many of the BOS troops have deserted and fled into the wasteland to find new lives, leaving the bunker occupied by a select few diehards.

In the wake of these troubles, a covert group of former BOS operatives has come into existence. Calling themselves the Circle of Steel, this group raids caravans and villages, confiscates any advanced technology they may have, and does so in the name of salvaging mankind from itself.

In the year 2067, Senator Todd Peterson decided to build a secret bunker to house himself and his family should war break out. Senator Peterson was a wealthy man in his own right, but lacked the funds necessary for such a project. Through secret dealings with Poseidon Oil and a covert branch of the government known as the Enclave, the final funding for the project was attained. A construction sight was chosen in southern Colorado and work began.

Ten years after the construction was completed, war did indeed break out. Senator Peterson was in Washington DC at the time and, much to his chagrin, was taken completely by surprise. The senator made a desperate attempt to gather his family and reach the bunker, but his small plane never arrived. The bunker might have remained lost were it not for a surviving member of the senator's family, Ben Schilling.

In the year 2077, Captain Roger Maxson left the Mariposa military base and traveled to the secret Lost Hills bunker for the purpose of establishing a new military order. He brought with him a loyal group of followers consisting of both military personnel and scientists. Among these was Corporal Ben Shilling. It was at this time that Maxson established the Brotherhood of Steel. As the Brotherhood grew they began to look into the possibility of expanding their operations. It was then that Ben Schilling revealed the location of the Senator Peterson's bunker. The location was filed for future use.

In the year 2231, Jeremy Maxson, was leading a thriving Brotherhood of Steel. Jeremy decided that it was time to expand BOS operations into the east. He sent an expeditionary force composed of five paladins to confirm the location of Peterson's bunker. The expedition leader, Andrea Brixley, discovered the bunker, disabled its security, and opened it for habitation. For over a decade she and her fellow paladins explored the east and forged relationships with many of the tribes that inhabited the area.

In the year 2242, Jeremy Maxson renamed the bunker after his famous ancestor, Roger Maxson. He then sent a full compliment of troops for occupation. Andrea Brixley was promoted to Elder, given the rank of General, and placed in charge. The remainder of her exploratory team was given the title of Elder as well. It was not long afterward that the war with the New California Republic was announced.

For years the war waged on and was considered a victory for the Brotherhood of Steel. However, no matter how many troops fell to the Brotherhood's superior technology, the NCR always seemed to have more replacements available. The Brotherhood, however, was not so fortunate. Being an elitist group, replacements were short in arriving. It soon became obvious that the Brotherhood was doomed to loose the war to the NCR's greater numbers. Moral at the bunker began to falter as the war seemed more and more hopeless. Eventually the inevitable happened. Lower ranking members of the Brotherhood began to desert their posts.

In an effort to end the war once and for all, the Brotherhood began to use newly discovered subversive technology known as StealthBoys. These devices could create a field of energy that would bend light around the user, thus making him virtually invisible to sight. This allowed Brotherhood operatives to penetrate deep into NCR territory for the gathering of intelligence. However, it was soon discovered that the devices had severe side effects. Paranoia, delusions, and eventual schizophrenia were the major ones. The Brotherhood disallowed the use of StealthBoys and once again fell behind in their war effort.

Now the Brotherhood of Steel is facing yet another problem. The side effects of the StealthBoys were not discovered until the team using them had already begun to feel their effect. When the team was disbanded, paranoia over the reason began to set in and the team plotted against their leaders. They stole the StealthBoys, fled the bunker as deserters, and formed a covert group known as the Circle of Steel. The goal of the COS is to recover lost technology and rebuild the glory of the Brotherhood at any cost.

This area consists of a cliff wall with a camouflaged hanger set into it. Nearby is a cave entrance that leads to the bunker proper.

This level contains the barracks, training room, armory, motor pool, and medical facility of the bunker.

This level contains the living quarters for senior personnel, the kitchen, the dinning area, a meeting area, the computer room, the water purification plant, and the brig.

This level was to be the private quarters of Senator Peterson and his family. It contains a computerized library, an office, a bedroom, and a power plant.

The Circle of Steel Hideout:

This is a random map composed of a small rural town/farm. It is here that the Circle of Steel will be confronted. 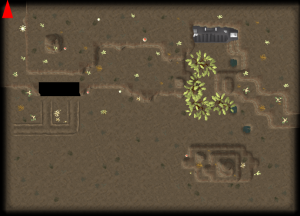 This is an outdoor area, mostly rocky in appearance. To the north is a small cliff wall. Built into the cliff is what appears to be a partially concealed hangar door. This door provides entry to the motor pool on the first level of the bunker (the door cannot be opened from the outside). To the right of the hangar door is a small cave mouth. The main entry to the bunker can be found within the cave.

The entry door is a standard Vault-Tek model with an access computer just to the left. If the player tampers with the computer a pair of guards will come to investigate. The player will be invited into the vault after a brief questioning. He will be immediately escorted to the medical center for disease testing. Upon passing the test he will be given partial access to the base. 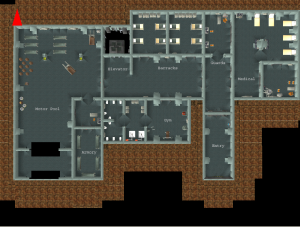 This level of the bunker is composed of the barracks, the gym, the armory, the motor pool and the medical center. This level is lightly populated with guards as well as some key personnel.

The player can meet the following plot critical people on this level:

The player can meet the following non critical people on this level:

Plot information: The base commander, Andrea Brixley, is suffering from a debilitating illness that Sarah has been unable to diagnose even with the help of the autodoc. Unless her ailment is diagnosed and a cure found, the commander will die. It is only through the pursuit of the solution to this mystery that the player can work his way through the different levels of the base. However, once the mystery is solved the rewards will be great. 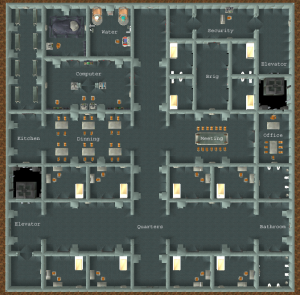 This level of the bunker is composed of the senior officer's quarters, the kitchen, dinning room, meeting room, a private office, the computer room, the water plant, the brig, and the secure elevator to the next level. This level is lightly populated by guards as well as some key personnel.

There are two ways that the player can gain access to this level of the base. First, he can help Sarah Whatley solve the mystery of the base commander's illness. This is unlikely to occur right away unless the player has good medical knowledge. Second, he can be on a quest from Edward Whatley to try and repair some of the malfunctioning equipment down here. They player will not be allowed to progress to the next level of the base until he solves the mystery of the commander's illness.

The player can meet the following plot critical people on this level:

The player can meet the following non critical people on this level: 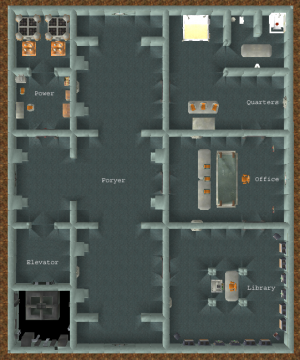 This level of the base is composed of General Brixley's quarters, her office, her library, the foyer, and the base power plant.

The following plot critical quests can be gained:

The Circle of Steel Hideout: 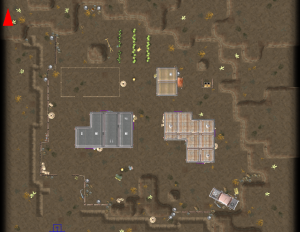 This is a random village that was wiped out by the Circle of Steel and then turned into a base of operations for their raids. The player will be required to lay siege to the village and eliminate the Circle of Steel soldiers that are entrenched here.

This village was chosen by the Circle of Steel for two reasons. First, they had the misfortune of owning a pre-war water evaporation device. This advanced piece of machinery was able to take water out of the hot desert air and store it for irrigating the meager crops of the village. Through proper rationing, it was able to provide water for the entire village as well. Second, the village was found to be in a very defensible area.

This location should be set up as a tactical combat area. Guards will be stationed near the single entry point and patrol the fences regularly. Small guard stations are scattered about that give clear angles of view over large areas of the village. Each of these stations is equipped with a mini-gun for maximum effect.

There is nothing unique in this area. It can use standard items and tile sets that any vault/village area will use.

The following sets will be needed: junk town, desert, crops, and a vault-like set.

This area will use the standard human models and such. 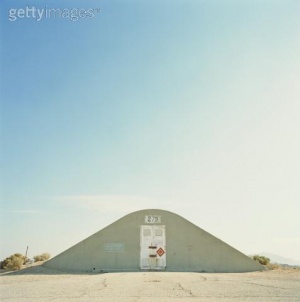