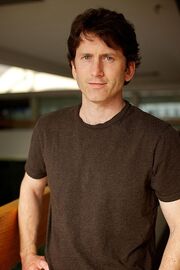 Todd Howard is the Executive Producer of Fallout 3. On Bethesda Game Studios Forums he uses the nickname "todd@bethesda".

The following are Todd Howard's posts from the Meet the Devs threads on Bethesda forums:

First, I just want to say that I think this thread is amazing, really one of the best we’ve ever had on our forums. And, in general, I’m pretty amazed at the sheer amount of discussion going on in these forums. We’ve only had the Fallout stuff open for a little while and it’s almost at what, 60k posts?

So, I figured, that level of activity certainly warranted a post from me. I thought to myself, yeh, I post on the forums, but then I checked and realized my last post was in…2004. Jesus. That’s pretty crappy on my part. I guess there’s two reasons for that, one, I’m pretty frickin busy all the time, and two, I get quoted and heard from enough that I don’t know that hearing more from me is really helpful. I think it’s more important that you hear from other people on the team who don’t get microphones shoved in their faces by the press. The bad news is, when it’s the press regurgitating what you say, it often comes out wrong, so I guess it’s better if I just post and say it myself.

Ok, so here goes the rapid typing and rambling from me, I bet this ends up too long, but what the hell, it’s been 3 years:

Who are you and what do you do?

Todd Howard, "person-in-charge" of Fallout 3’s development. I’ve worked on most of our stuff, but the one’s that I "created/was in-charge-of" would be Future Shock, SkyNET, Redguard, Morrowind, and Oblivion.

What are your inspirations?

Oh, whatever. You guys just ask these questions because you’re subversively trying to get a better understanding of who we are and what makes us tick, because that will give you insight into what Fallout 3 is and what’s going to make it tick, so I’m not going to answer the questions, since I think you guys have proven you deserve something more, straight from "the horse’s mouth".

Obviously I can’t talk about the game itself yet, but I can give you a look into how I/we approached it. When we first got the license in 2004, I was pretty ecstatic, I pushed pretty hard for us to get it, because I really liked the first game and thought Fallout would be a great fit for us, it has all the big things I love about RPGs – player freedom, big world, go do what you want type of stuff. But once you have it – you obviously get to work on how to approach an icon like Fallout. And it’s much harder then you think, because it’s certainly a game that has grown in its legacy as time goes on, it’s hard to sift through what its "essence" or "soul" is, because it’s aged, and people often discuss it in nostalgic tones.

I obviously replayed the games, and Fallout 1 remains the truest inspiration for what we’re doing, but again, it can be hard to get at the "soul" of it, because of its aging. So I look to things like the first game’s manual. The fiction and tone of it. There is also a great, great section in the Fallout 1 hintbook, "One Woman’s Path through the Desert", which is a journal of going through the game, as if it was real. In some ways, that section is a better look into the game then the game itself. I also read old-reviews, because they gave me a better understanding of how those games felt then. Again, removing the aging.

I obviously looked at all the PA movies – Boy and his Dog, Mad Max, Strangelove, etc. Though I find the actual PA movies end up fairly generic, and don’t capture what is special about the Fallout world, and that’s not the world that you end up with, but the world of 2077 that gets destroyed, and then built upon. I became far more interested in the "pre-war" world, then the "post-war" world.

I also looked a lot at my own reactions to other franchises that have had long gaps and were reborn/updated again in another era. Mostly movies, and such, The Lord of the Rings, Superman, Batman, etc., etc. Now, I’m a recovering comic book junkie, so I’ll probably be throwing around a lot of superhero references, and I hope they make sense. Speaking of which, I’d really like to sell a bunch of long-boxes from my basement if anyone wants them, you just can’t have my signed Frank Miller Dark Knight. Speaking of Dark Knight, Batman remains my favorite (one day I’m gonna rock the house with an open-ended gotham city Batman game, mark my words). The recent Batman and Superman movies, or even their earlier counterparts are pretty good examples of classic iconic franchises that were reborn again. I love…love…Batman Begins. Chris Nolan is a @#$*!^& genius. See the Prestige if you haven’t. Now, I have problems as a huge Batman fan with it, but the pure "soul" of Batman beats in the heart of that movie, and Nolan’s current "I believe in Harvey Dent" tease from The Dark Knight is further proof of his genius.

I also love the first Superman movie, and I think I draw many parallels from Bryan Singer doing Superman Returns, which tries to follow Superman 1 and 2 and ignore 3 and 4, to our own situation. Reg Richard Donner’s Superman, one of my mantras, and it’s a word he used for making that movie, is "verisimilitude". Look it up if you don’t know what it means. Donner made a sign of it and put it up (maybe I’ll do the same). I want to bring that to Fallout, I want to make it real again, and come alive like it’s the first time you’ve ever seen it. Treat it with respect, and don’t cheese it up.

I wish I could give you real, true, insight into what we put into our games, and this is not me just trying to sell you, or smooth you over, because I’m Ok, really, if you don’t love what we do. We’re fans, we’re passionate about what we do. We go on a crusade to make the best game we can. We make the game we would run to the store and buy, we argue, we debate, we scream, we stay up all night, we clap and cheer the highs and curse the lows. One day we’ll find a way to make you a fly on the wall in one of our design meetings – they’re pretty damn inspiring. And I wish you knew all the faces of the 80 people busting ass to make this game great. The secret superstars you don’t know of like Istvan Pely, Mike Lipari, and Scott Franke. I could go on and on.

I’m often asked about the fans and our forums, and I think you all want to know if your opinions are heard or it you’re shouting into a black hole. And I can assure you that we have these forums so we can hear from you. And yes, we read most of it. It’s like a car crash you just have to watch sometimes, lots of violence and parts exploding, but there is something awesome in its power. Your opinions do matter, and we want them. We are influenced by what gets said about us on these forums, in the press, the letters we get and so forth. Speaking of letters, we do get a lot, and the letters are different then the forum posts. One of the popular letters we get is from someone who’s had a life-changing experience, or gone through a bad time, and had to write us to tell us how much Morrowind/Oblivion meant to them. That it became a real world to them, that they got to escape and play a stronger/different person then they are in real life, and it helped them. You have to pretty jaded to not have that affect you. And that’s why you come to these forums and that’s why people outside of RPGs and/or Fallout may think you are crazy. Because they are not just games, they are worlds, and for the time you play them they are as real as anything you have experienced in life, they become part of you and you care. That’s why you and I are both here.

To say we care about Fallout would be an epic understatement. We are excited/humbled to be the ones to bring it back. I know we don’t have all the right answers, or the one’s you would make when it comes to how it should be or look. We can only do what we think is right and what makes us the most excited, and that’s what we’ve done. We’ve left no stone unturned in trying to find Fallout’s "soul", but those decisions are ours, not yours. I just hope you give the game a look and decide if that soul is there for you.

I think I know what it feels like to adopt kids now, because we adopted Fallout and for the last 3 years we have been doing our best to care for it, and now I love it like it had been our child forever; and soon, very soon, we can show him to the world again. I think he’s got something to say, and I think it’s important.

You may not agree, you may be too cynical to look at it objectively anymore, but I’m going to guess that you’re reading this forum because Fallout really does matter, and it does mean something far more to you then just "a game." So for my final superhero reference, I leave you with this quote from Christopher Reeve; insert Fallout:

"I've seen first hand how Superman actually transforms people's lives. I have seen children dying of brain tumors who wanted as their last request to be able to talk to me, and have gone to their graves with a peace brought on by knowing that their belief in this kind of character is intact. I've seen that Superman really matters. They're connecting with something very basic: the ability to overcome obstacles, the ability to persevere, the ability to understand difficulty and to turn your back on it."