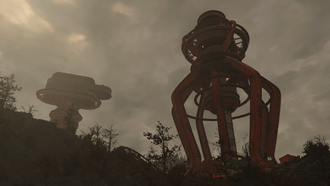 The Unfinished and Garrahan mega mansions

Mega mansions are a unique form of architecture in Fallout 76. There are only three mega mansions in Appalachia, but each one once stood tall in the skyline as a symbol of wealth and power, but now largely function as distinctive landmarks in the Ash Heap and Savage Divide.

Built in the vein of a superstructure, mega mansions are built on top of a base, one level floor that acts as a "lobby" with an elevator (all require a keycard to operate) that leads to the upper mansion levels. These mansions seemed to be favored among the ultra-rich mine owners, like both the Hornwright and Garrahans, as it allowed them to overlook their mining operations while keeping away from the pollution those mines caused. The mega mansions would also catch the eye of the public (at least conspiracy theorists) about improper use of technology.[1]

By the time of the Great War, mega mansions were an undeniable symbol of wealth that loomed over the working-class miners. Eventually, miners began targeting mega mansions in opposition to losing their jobs to automation and would destroy an unoccupied mega mansion in Bramwell with mining equipment and explosives.[2] Despite riots targetting of the wealthy's property, two are still standing after the Great War with little structural damage from the 25 years of no upkeep.

Mega mansions have only appeared in Fallout 76.

Mega mansions appear to be inspired by the apartment houses of The Jetsons.