The Mesmetron is a prototype non-lethal weapon in Fallout 3.

Developed by Implied Hypnotics, Inc. before the War, the Mesmetron is an experimental "non-lethal subjugation device" provided to the United States military for them to assist in experimental trials.[1] It operates by sending a series of waves that the brain attempts to decode, but because the synapses are being overwhelmed by the neural static, the brain becomes confused and switches off important higher-level mental functions and voluntary motor control,[1] leaving the target extremely susceptible to suggestion.[2] Still in its testing phase, the weapon was found to have the potential to trigger two undesirable side-effects: extremely increased aggression or a "resonant brain wave feedback loop" which resulted in spontaneous cranial eruption.[1] Despite the prototypical nature of the device, several were attached to robobrains to add in interrogation processes. (Officially noting the 10-15% casualties due to spontaneous cranial eruption.)[3]

The model given to the Lone Wanderer in Paradise Falls was scavenged from an old military base by Grouse Jurley.[4][5] The Mesmetron is invaluable to slavers, making it a cakewalk to capture slaves, which are left senseless by the Mesmetron waves.[6][7][8] However, caution must be exercised when using the Mesmetron around already collared slaves, because the waves interfere with the collar's radio signals and cause it to unintentionally detonate.[9]

The Mesmetron can fire a total of 2475 waves, or 495 full cells, before breaking.

As previously mentioned, using the Mesmetron on an non-player character can have three different outcomes. These effects vary and are generally unreliable, so it is advised to save before using this weapon on anyone important. Due to the fact that using the Mesmetron is considered assault, it is advised to "mezz" someone while not detected. Be aware that mezzing anyone who is already wearing a slave collar will cause the collar to malfunction and explode, killing the victim. Hostile non-player characters who were mezzed can also be turned friendly by being freed by the player (high Science skill required). An analysis of the Mesmetron's effects is as follows. 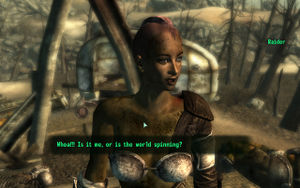 A raider stunned by the Mesmetron

This effect stuns the target for a few seconds, during which time the victim will stand with their head swaying from side to side and it is possible to engage them in conversation. Some characters cannot be stunned, resulting in the probability of the Frenzy effect to be raised to 80%.

While in conversation, there are three options. The first convinces the character to allow themselves to be robbed of their possessions and will open up the victim's inventory, allowing any item to be added or removed. The second slips a slave collar on the character (instantly resulting in negative Karma). The third simply tells the victim to "walk it off"; this exits the conversation and make the character resume what they were doing.

The second set of dialogue options is unlocked by slipping a collar onto the victim. The first is the "cruel" way to tell the victim that he is now a slave ("...your head will explode!"), the second option allows access to the slave's inventory, and the third option is a slightly friendlier way to inform the victim of his/her "new occupation" ("...nothing personal").

If the character is not spoken to before the stun effect wears off, he or she will become hostile to the player.

This alternative effect causes the victim to go into a state of frenzy, attacking anyone nearby (most likely the player), and causing all other characters to turn on them.

This alternative effect of the Mesmetron may not be the most useful, but is definitely the most spectacular. When victims are affected by the Mesmetron in this way, they will become hostile (and either run, stand still, or attack) for just a moment before their heads literally explode. This effect will instantly grant negative Karma (if the victim was good/neutral) and make any nearby non-player characters who were not hostile to the victim become hostile to the player.

The Mesmetron is given to you by Grouse, the Paradise Falls entrance guard, when you start the quest Strictly Business.