From The Vault - Fallout Wiki
(Redirected from Metro)
Jump to: navigation, search 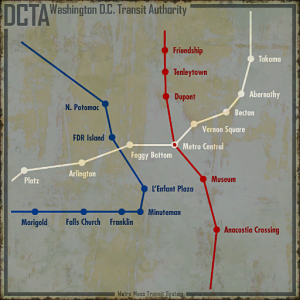 Map of DC area metro as found at metro stations

The Washington, D.C. Metro was the pre-War rapid transit system, administrated by the District of Columbia Transit Authority. Complemented by an above ground network of City Liner buses, it provided the citizens of Washington, D.C. and visitors with an extensive transit network spanning not just the city, but also locales in Maryland and Virginia.

Although the system was abandoned and fell into disuse after the Great War, the quality of its construction allowed it to survive two centuries in fairly good condition, providing the means for travelling between the districts of D.C. and its neighboring communities, even if above ground routes are unavailable.

With its origins dating back to the 20th century, the Metro was one of the largest public transit systems in the nation, with millions of trips each year.[1] The extensive network of stations and rail tunnels was continuously upgraded and revamped, driven by the continuously rising demand for convenient transit in a city beset by congestion and pollution.[2]

By 2077, the metro network consisted of three primary lines (Blue, Red, and White), with portions of it semi-automated. Protectrons were widely deployed to provide security and processing passengers in the absence of personnel.[3] Wartime regulations also led to a heightened level of security among DCTA personnel, whose security teams were provided with military-grade laser pistols as standard sidearms.[4]

When the Great War came, the metro network weathered the holocaust mostly intact. Although some sections suffered damage and lost power, most of the network remained under power and its systems fully functioning, providing shelter to those that hid from the nuclear bombardment within. Soon after, remnants of the DCTA attempted cleanup alongside survivors from government agencies, the military, and law enforcement. Metro stations were sealed with chainlink barriers,[5] with some used as dumping ground for irradiated soil and other dangerous waste.[6] However, as it became clear that the United States was not coming back, the survivors gradually gave up until there was no one left to maintain the Metro. Worse, nuclear fallout drifted underground, the radiation slowly seeping into the bodies of the survivors. Those who did not succumb to radiation sickness were twisted, changed into ghouls or worse, mindless, aggressive drones. The latter eventually became the most frequent encounter within metro stations.[7]

As the years passed, the metro network deteriorated. Without maintenance, tunnels collapsed, stations caved in, while technology often simply shut down in the absence of power and presence of environmental damage. Yet vast portions of it remained intact, some of it still powered by automated power plants that escaped devastation and decay. Humans and mutants laid claim to a number of stations, driving out the wildlife. Nearly two centuries later, in 2277, the Washington, D.C. metro network remains a place of refuge for raiders and impoverished wastelanders, a highway for militarized groups vying for control of the region, and a treasure trove of salvage for those willing to brave its dangers, including super mutants, raiders, and feral ghouls. 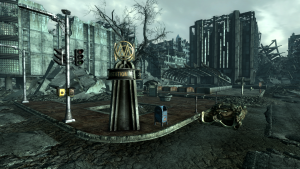 A metro station at Anacostia, showing the typical traits of a DCTA station above ground: The iconic Metro pylon, art deco information board (center), and a large canopy shielding the escalators leading below ground.

The rapid transit network below Washington, D.C. is nothing short of extensive, with its lines terminating as far as Warrington in Virginia and Meresti in Maryland. Stations are easy to spot above ground. The first sign is typically the Metro pylon, with the Metro information board (and its art deco aesthetic) nearby. Larger stations are also usually distinguished by canopies suspended above escalators leading below ground (as in Anacostia Crossing and Metro Central), marquees on the fronts of the buildings resting on top of them (eg. Franklin station), or large metal-and-glass canopies stretching over the entire station if it's located on the surface (eg. Falls Church station). Smaller stations (or those where circumstances precluded large entrances) will usually have a smaller canopy.[8] 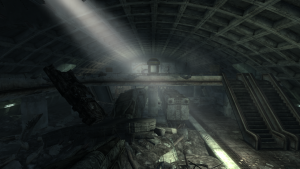 Museum station, showing the most common mezzanine and platform layout.

Underground portions of the stations were largely standardized before the war. The typical layout consists of Brutalist-style concrete corridors leading from the entrance to the upper mezzanine of the station, from which passengers could ride escalators down to the platforms and board the metro trains. Stations have vaulted, coffered ceilings without supporting pylons, giving them excellent structural integrity. However, even it is prone to damage and collapse without maintenance, as many stations caved in after the Great War, often with surface elements sinking below and dropping into the station proper. 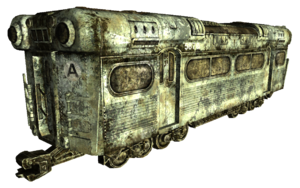 The Metro network employed cutting edge technology wherever possible. Each metro train was composed of an engine car, pulling the passenger cars. This high powered car featured an elevated driver's cabin, giving the driver an excellent view of the road ahead.[2] Current information about the network was delivered to passengers via automated DCTA status monitors[9] or protectrons deployed to the station in the absence of human personnel.

Metro protectrons were one of the most widespread security and utility features across the metro network. Usually accompanied by RobCo Industries, these automatons were provided with military-grade laser weapons to enforce security against communist invaders or (more often) pickpocketers and free riders. They were also provided with scanning devices to recognize valid metro tickets.[10] 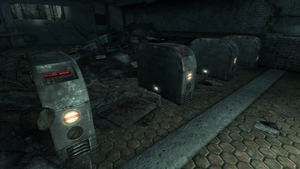 As such, the process of travelling was largely automated. Passengers gained admission by buying Metro ticket, tokens, or long-term pass cards, presented at turnstiles leading to the station (usually placed inside entry corridors, though some stations had them on mezzanines). Booths were also installed for personnel, doubling as information and security stations.[8] 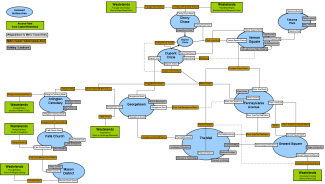 The primary lines of the metro connected Washington, D.C. and its surrounding areas together, allowing one to reach any location easily. Unfortunately, the Great War and subsequent centuries of disuse led to widespread damage, forcing anyone travelling the old metro tunnels to take detours around cave-ins and other damage preventing further progress. However, a majority of stations along the main pre-War lines survives, in one form or another. A patient traveler can still cover a lot of ground, reaching remote areas of the city without ever having to go above ground.

In game terms, the metro stations, tunnels, and infrastructure allow the player to move between the various districts of Washington, D.C., as overland travel is impossible, except in the outlying areas. The map in this section shows how the individual stations connect to each other. While some stations and locations, particularly in the northern sections of the city, may seem right next to each other, they are often in entirely different districts. While a pre-War map of the stations can be downloaded in most metro stations, it is a very generic one that can often hinder navigation.

The metro is typically infested with feral ghouls, raiders, super mutants, wildlife, or a mixture thereof. Resistance can be expected, as is a lot of loot.

The Red line originates in Maryland, near the township of Meresti, where its northern terminus is also located. Connecting communities north of the Potomac, it continues through the city, all the way south to Anacostia and beyond. Pass cards were available for this line.

The Blue Line originates in Virginia, at the Warrington trainyard, continuing through neighborhoods in western Washington, before returning to Virginia and terminating beyond the Jury Street township. Pass cards were available for this line.

The white line originates in Virginia and connects with Maryland, crossing the entire Washington in the process.

The metro also includes a number of special lines. The most important one was the presidential metro, which was a special government line separate from the civilian network, connecting the White House, United States Capitol building, Adams Air Force Base, and other strategic locations in and around the capital. It was also controlled by a separate entity, M.A.R.Go.T. with military-grade robots (Mister Gutsies and special sentry bots) for security.

The most predominant of these connective areas are the metros. Metro is the colloquial term for the D.C. subway system, operated by the fictional DCTA organization. We envisioned a pre-war system of stations and tracks which mimics D.C.'s real-world public transit system, and used that to guide our development of the DCTA metro. While many tunnels have collapsed and stations have been rendered inaccessible, the player can still make use of in-world cues such as maps and station signs to navigate the innards of D.C. The largest continuous set of tunnels allows the player to reach almost any neighborhood without needing to go above ground, negotiating derelict train tunnels and frequently passing through mingled areas such as collapsed basements and natural caves exposed within the decaying underground. This also helped us to contrast the overworld and underground of D.C. through gameplay. While the ruins of D.C. are overrun with supermutants and unchecked mercenary patrols, the underground areas are refuge to generally-weaker denizens such as feral ghouls and radroaches, though it is harder to avoid conflict in these claustrophobic confines.

”— Notes on Pulling the Sky Down: The Level Design of Fallout 3

The Washington, D.C. Metro appears only in Fallout 3.