From The Vault - Fallout Wiki
(Redirected from Mirelurk Egg)
Jump to: navigation, search 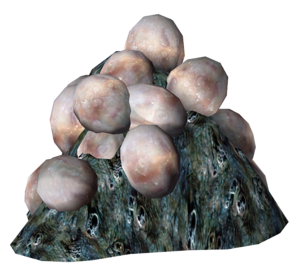 A variant of mirelurk eggs

Mirelurk eggs or mirelurk egg clutches are a type of container in Fallout 3. Mirelurk eggs contain a various amount of mirelurk meat which can be eaten for health or sold for caps. It is not yet known how the eggs are laid as it is impossible to tell whether mirelurks are male or female. Mirelurk eggs appear to be a pile of greenish-brown spheres moulded into a cone formation when looked at. The eggs will almost always be guarded by mirelurks, mirelurk hunters and/or mirelurk kings.

Mirelurk eggs can be found nearby the Super-Duper Mart. They are found near a white boat on the river. Head to the boat, then head northwest of it (or to the north-northeast from the mailbox of the ruined house), and on the river bank is a large cache of mirelurk eggs. It is probably best to approach the area without being too close to the bank itself. A mirelurk or two plus perhaps a mirelurk king (depends on player's current level usually) might be swimming in the nearby shallow water.