Mirelurks are the catch-all terminology for all three large crustacean mutants that dwell in the mires of the Commonwealth.

Mirelurks have the dubious distinction of being one of the first radioactive mutants to emerge into the world, as a result of widespread radioactive pollution of the environment by United States megacorporations such as Poseidon Energy or General Atomics. Environmental organizations such as Nahant Oceanological Society, dedicated to saving the oceans, attempted a variety of last ditch efforts to raise awareness of the problem and encourage radical action to curtail environmental destruction at the hands of reckless corporations.[1] However, their efforts were in vain. Ignored by authorities, to the point where they refused to even take their phone calls (as was the case with the Boston Port Authority), they attempted to garner attention by reporting the situation to the Galaxy News Network. The media ignored their reports as well, except for running a story about the upcoming shellfish season and how great it was going to be. Of course, it neglected to mention that the average increase in mass on the order of 14% in crabs and 12% in lobsters meant that the available food supply would run out quickly, leading to colony collapse and localized extinction.[2]

Although the Great War put an end to corporate pollution, it was replaced by overwhelming amounts of nuclear fallout instead. In the ensuing melting pot of mutations the modern mirelurks emerged. Attempts to classify the resulting creatures have proven difficult. The crab mirelurk, for example, contains multiple phylum markers from two distinct and unrelated species: The Atlantic horseshoe crab (Limulus polyphemus) and the Atlantic blue crab (Callinectes sapidus). As such, it would be necessary to catalogue it simultaneously as belonging to the Crustacea and the Chelicerate phylums, with simultaneous classification a two distinct classes (Merostomata and Malacostrata). As such, wasteland scholars generally assign it its own classification: Scylla serrata horrendus.[3][4]

Although mirelurks tend to inhabit polluted rivers, coastal waters, and sewers, their meat is considered a delicacy among wastelanders. Mirelurk hunters and herders can count on a steady demand for their meat and make a high profit selling it to wasteland traders.[5] However, the size of the meat market means competition is stiff and suppliers can be targeted by rivals attempting to knock them out of the market (sometimes literally).[6] They also grow remarkably fast, requiring just a few weeks for them to reach maturity. If corraled and domesticated, mirelurks can be a flexible supply of food. The Free States did, in fact, entertain such an option.[7]

Mirelurks can also be a blight on permanent settlements, as is the case with Rivet City. Mirelurks nesting below inhabited decks are a continued nuisance for denizens of the city, despite regular extermination operations by the city's security team.[8] Infestations are made even worse by the fact that mirelurks have adapted to lay their eggs in multiple small nests throughout shallow water (unlike pre-War crustaceans that adhered their eggs to their body), likely because they grow larger relative to the parent and have developed a hard calcified shell; if disturbed, the larval mirelurks within exhibit incredible precocious behavior and are ready to attack if need be.[9]

Hatchlings are the youngest form of mirelurk, freshly hatched from its eggs. Despite their age, they can still be a threat, as they emerge from their shells with the mirelurk characteristic aggression intact.

They are ferocious apex predators and will pursue their prey incessantly. They mostly attack with there huge and powerful claws as well as slamming into prey in order to stagger them; therefore, it is best to keep mirelurks at a distance. Furthermore, mirelurks instinctively keep their vulnerable faces down, protected behind their hardened shell, until they are within striking distance. To this end, explosives are very effective against them until they close distance and show their faces; after this, shotguns and automatic weapons have the best chance to hit the small target. 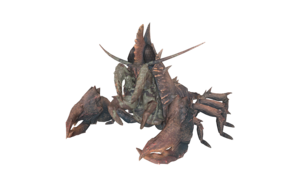 Hunters lack the armored shell of their crab brethren, but make up for it with sheer ferocity and aggression, as well as increased damage. They are also capable of attacking at range, by lobbing corrosive acid spit at their enemies. It's best to keep them at a distance and strafe, to avoid being covered in mirelurk spit. 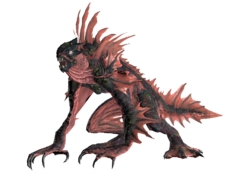 Kings are perhaps the most challenging mirelurks to face. Apart from their excellent agility and low profile, they hit hard and attack with both poison and a sonic attack at range. Taking them down requires a bit of effort compared to the rather dumb regular mirelurks and hunters, especially since kings will constantly attempt to close distance and attack in melee. Ranged builds beware! 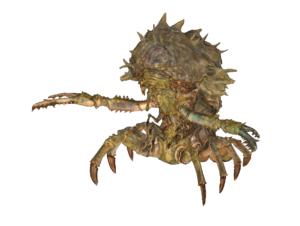 The queen is a powerhouse, especially before the player acquires weapons that negate its high damage resistance. It's more susceptible to energy weapons, but even with them and DR-reducing legendary effects, it is a challenge. The queen cannot be paralyzed, does not stagger, and cannot, of course, be immobilized or crippled by Dogmeat. The player needs to deal with it directly.

These mirelurks appear only in Fallout 4.