The missile launcher is a big gun found in Fallout 3. 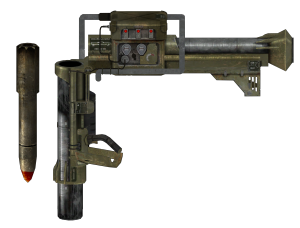 A very common and very powerful big gun, the missile launcher sends a high velocity explosive projectile that detonates upon impact (whether it be a structure or an enemies). Its potential is somewhat hampered by its long reload time and inability to kill anything stronger than a super mutant brute in a single shot.

A fully-repaired missile launcher can fire 83 missiles before breaking.