Modoc is a town upon the remains of the Modoc National Forest, located in northern California. Modoc can be found fifteen squares east and three squares south of Arroyo.

A small community of farmers and ranchers sitting on the edge of the Modoc National Forest, this town has been the primary supplier of food (crops, meat) and raw agricultural products to the surrounding settlements for years. The arrangement has been very beneficial for the inhabitants for years, until the harshest drought in decades hit it in early 2241. Withering crops and dying brahmin signaled a potential death sentence for the small community.[1][2]

By mid-2241 was still operational, led by Jo, its multi-purpose mayor, sheriff, and justice of the peace. Ranchers have been gradually culling their herds to cut down on expenses and minimize losses, but the drought hung above the town like Damocles' sword. Traders who once left with cartloads of grain and meat now only stopped in the town long enough to restock and continue onward.

Beyond the drought, Modoc has its fair share of issues. Reports of ghastly apparitions at a nearby farm have the locals spooked, mostly because of the disappearances of a fellow towny and a child, rats have attacked local gardens, and there is no end of rumors about the chicken that Rose keeps in her shed.

The visit of the Chosen One to the town has changed it. By securing good relations with the Slags, he preserved the town and allowed it to become a major source of food for the region once again.[3] However, he also killed Rose's deathclaw, robbing Modoc of quite an unique element of cuisine.[4]

Modoc is divided into two districts, one cave section and two outside section. 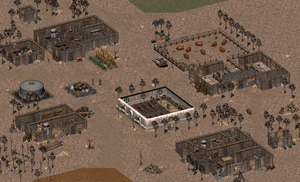 Welcome to the quietest town in the Wasteland
Main article: Main Street

Main Street is the entrance of Modoc. Jol, the sheriff and the merchant of the city stands here, running the trading post and organizing trade between Modoc and other cities. Interesting place include the tannery of Balthas in north, the house of Grisham's family and the church of Modoc. 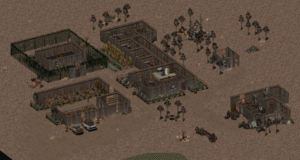 Cornelius built this B&B for his sweetheart Rose (maybe) when they were young lovers. The B&B had a decently boring life since then, until it was covered in goop from the outhouse explosion caused by the Chosen One in 2241.

Farrel tends these crops and he is proud, but the crops are infested by rats. The Chosen One can kill the vermin for Farrel. 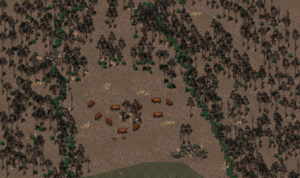 This location is only accessible during the quest "Guard brahmin herd for Grisham". It's a small brahmin pasture next Modoc owned by Grisham. At the moment the Chosen One enter in the pasture, some wild dogs want to kill the Grisham's brahmins for eat. 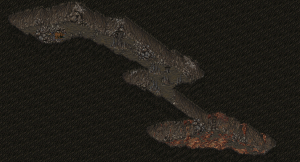 A huge cavern below the Modoc's toilet filled with goo, with a pile of rocks blocking the passage to the north to a mole rat lair. Within the cavern, there is an large amount of methane, so the smallest spark would blow it sky-high.

Modoc appears only in Fallout 2. However, while not appearing in-game, Modoc is mentioned by few characters in Fallout: New Vegas.[5]