Mother or Matriarch is the oldest, wisest and strongest of all the hairy deathclaws found in and around Chicago. Her real name is difficult to pronounce so everyone just call her Mother.

Mother looks like an extra large Deathclaw. She is much stronger, tougher, and deadlier than the average adult Deathclaw. She has a deep, booming voice. Her motivation is her broodlings.

She is the leader of her kind, referring to them as her brood. However, she was captured by the Beastlords of Mardin and was used by them to gain control over deathclaws. She was liberated by the warrior of Brotherhood of Steel. Thankful, she permitted some of her kind to join the Brotherhood and even joined it herself.

Matriarch as she appears in Mardin 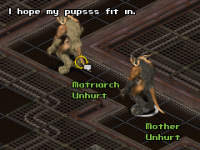 Matriarch as she appears in Bunker Gamma, accompanied by the recruit Mother

Mother appears only in Fallout Tactics: Brotherhood of Steel. Her appearance is different in the various settings where she is encountered: