Mutated flux flora is a mutated type of plant that temporarily manifests in the wake of a nuclear detonation, with unique properties. It's used as a high level crafting material in Fallout 76. 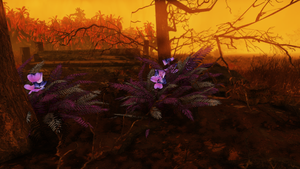 Flash fern, a mutated fern exposed to the intense radiation of a nuclear blast.

Flux flora is a type of mutated flora that briefly emerges in the wake of a missile detonation. The radiation and extreme conditions can fundamentally change the nature of the affected plant's tissue, showing exceptional versatility in manufacturing, as a fuel and component for advanced weapon and armor systems.[1] There are five types of flux, each of which emerges from a different kind of plant and requires stabilizing with chemical components for long-term storage and use. Inert flux is useless, except as an irradiated, but highly hydrating consumable item.[2]

Before the Great War, the military believed that the intense radiation would only produce hideous monstrosities only fit for extermination. The appearance of the flux, collected and researched by the Enclave in Appalachia, was a major surprise, along with their exceptional versatility and volatility. However, the relatively brief lifespan of the flux rendered them a historical curiosity, rather than a permanent element of wasteland survival.[3]

Some components of flux are references to actual nuclear material, such as Yellowcake and Cobalt, and the term flux itself refers to Neutron flux.